Loughborough Lightning fell to their first home defeat on Saturday after a 19 – 40 loss to visitors Harlequins Ladies in the third round of the Tyrrells Premier 15s competition.

Given their home success a couple of weeks ago to Worcester Valkyries, Lightning had established themselves as the team to watch this weekend; this time facing off against a formidable Harlequins opposition. 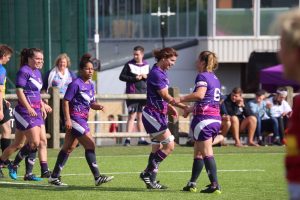 Current league champions, Harlequins posed a new challenge for the home side. As last year’s winners Harlequins have gone two from two in the new look Tyrrell’s Premier 15s and are favourites for the 2017/18 league title. However after a brilliant eight try opening day triumph over Worcester Valkyries, Lightning went over the line a further four times away at Saracens, but couldn’t stop the hosts prevailing 34-20.

The game commenced with an explosive first half, with both teams scoring and converting within the first 10 minutes. Ugiagbe was the first to put points on the board for Lightning, and was followed up by a Phillip conversion. Pearce then went over in the 12th minute with yet another Phillip conversion to give Lightning the lead.

However the discipline and determination of Quins proved a far cry from the previous visitors; they managed to cross the try line a further two times before the half was over. The tables truly had turned by the end of the half.

Team talks over, it was all to play for as both teams returned to the field for the second half. Quins’ line speed and crash ball play proved effective as they opened the scoring in the second half just two minutes in. They then added to their tally mere minutes later. In the 55th minute, Hardy scored for Lightning to stem the tide of Harlequin’s points but sadly this was not enough to halt their impending victory.

Head Coach Rhys Edwards was keen to praise the squad however: “We had good control of the game during the first half however we let Quins in just before the half. We didn’t manage the second half as well as we would have hoped, the ball wasn’t in our possession often enough to make an impact and the quality of the opposition punished us for it.

“We did have some great performances on the pitch and we can relish in the fact that we still scored three tries against the current champions who have yet to lose a game. The challenge for us now is to bring a consistency week in week out.”

Returning from international duty to captain her side once again was Rachel Malcolm: “It was a disappointing score line and for us it’s now about tightening up and being consistent for the full 80 minutes. We started really well in the first half and there are lots of positives to take forward but equally lots of things for us to work on going into next week against Firwood Waterloo.”

The girls have another home court advantage in the next round of the competition as they face Firwood Waterloo Ladies on Saturday 7th October at Loughborough University. Why not head down to campus and support them as they continue with their campaign.