Great Britain’s Lucy Shuker partnered Stephane Houdet of France to claim the 2017 British Open Mixed Doubles title, but there was disappointment for fellow Brits Alfie Hewett and Andy Lapthorne as they lost out in the men’s and quad singles finals respectively. 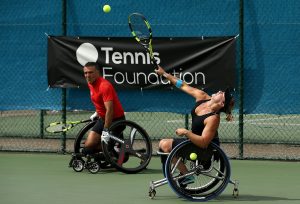 On the other side of the net to Shuker in the mixed doubles final was Hewett and his partner Dana Mathewson of the USA, and together with Houdet the quartet played out a competitive encounter that enthralled the Nottingham crowd.

After trading some superb winning shots it was Shuker and Houdet who claimed the first set before.  Hewett and Mathewson hit back in the second and led 5-4.  However, Shuker and Houdet held their serve and then broke to take the 2017 title with a 6-3, 7-5 victory.

Commenting on the win, Britain’s women’s No.1 Shuker said: “It was really good fun, Stephane is a great partner to play with and is always encouraging.  Dana and Alfie played really well but for me today it was just total enjoyment.”

There had been high hopes for British success going into the final day of the ITF Super Series tournament at Nottingham Tennis Centre, with Hewett and Lapthorne both having reached singles finals.

Hewett started off the day taking on world No.1 Gustavo Fernandez of Argentina.  Despite having lost the first four games there were hopes of another famous Hewett comeback when he levelled at 4-4, but Fernandez reeled off the next five games to take the first set and lead 3-0 in the second.  Hewett again turned the momentum round to level at 3-3 but the power of the big-hitting Fernandez saw him complete a 6-4, 6-3 win to claim his first British Open title.

Hewett was followed on Centre Court by Andy Lapthorne in the Quad Doubles final against world No.1 David Wagner from the USA.  Things looked promising for the world No.2 early on as he matched Wagner to reach 3-3 in the first set, before the impressive American, fresh from having won the quad doubles on Saturday, won eight games in a row to seal a 6-3, 6-1 win and regain a title he last won in 2009. 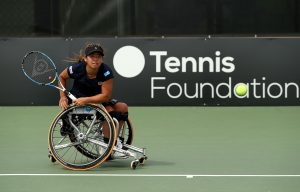 It looked like an upset was on the cards in the women’s singles final as Diede de Groot of the Netherlands raced into a 3-0 lead against Japan’s world No.1 Yui Kamiji.  However, Kamiji’s sheer effort around the court helped her to turn it around to win the next six games to claim the first set, before going on to win the title 6-3, 6-4.

The future of wheelchair tennis in Great Britain looks to be bright with a hugely increased entry in the Tennis Foundation’s British Open junior tournament.  Scotland’s Ruiari Logan retained his boys singles title with a 4-0, 4-0 win against Northern Ireland’s Ross Gourley, and then added to his burgeoning trophy collection by partnering fellow Scot Ellie Robinson to take the British Open junior mixed doubles title 4-0, 4-0. 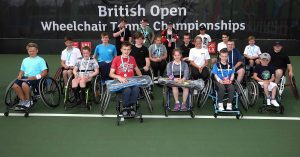 Sunday’s action in Nottingham completed the list of 2017 British Open champions, with the men’s, women’s and quad doubles titles having been decided on Saturday.

Organised by the Tennis Foundation, the British Open is one of six Super Series events on the UNIQLO Wheelchair Tennis Tour and one of the most important tournaments in the world outside of the Grand Slams.

World class wheelchair tennis will return to the East Midlands at the end of the year after Loughborough University was announced on Friday as the venue for the prestigious end of season NEC Wheelchair Tennis Masters tournament from 29 November – 3 December 2017.

The Tennis Foundation is Great Britain’s leading tennis charity, with a vision to make tennis a sport which is inclusive and accessible to all. It works to open up tennis to its priority audiences of disabled people, young people in education and in lower socio-economic communities – making it possible for them to enjoy the many health and social benefits of the sport whilst maximising their personal potential.