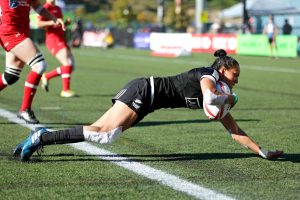 New Zealand moved a step closer to regaining the HSBC World Rugby Women’s Sevens Series title in Langford, Canada, on Sunday when they put in a gutsy display in the final against the home side that was enjoying playing in front of a partisan and packed crowd.

A barnstorming display by Rubi Tui that won her the HSBC Player of the Final award, spearheaded an impressive Black Ferns Sevens performance as the series champions-in-waiting registered a 17-7 victory in the final.

Two early NZ tries from Michaella Blyde (one of a remarkable nine she scored this weekend) and Tyla Nathan-Wong, rocked the home team, who found themselves 12-0 down with just three minutes gone. An eerie hush descended on Westhills Stadium, which just moments before had cheered raucously after a rousing rendition of ‘Oh Canada’. But if anyone thought it was going to be a stroll in the park for New Zealand, that’s not how it would pan out as Canada fought their way back into the game.

Indeed, with captain Ghislaine Landry leading from the front, Canada threatened to upset the Kiwis and they hit before the break with a try from speedster Julia Greenshields. And that’s the way it stayed until the final play of the game when replacement Alena Saili crossed in the corner to seal the deal for New Zealand.

Led by Tui, Theresa Fitzpatrick and Niall Williams, NZ did their best to control the ball in that tense second half and they were largely successful, frustrating the home side by denying them possession at every turn.

You can see all results from Langford here.