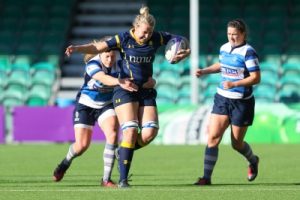 Gill, who captained Valkyries in their final Women’s Premiership game of the season last weekend, believes the squad are capable of finishing the season on a high.

But she knows they have to be at the top of their game if they are to get the result against the side that finished top of the league table.

She said: “It’s a cup final and we want to end our season with a trophy. It’s a big occasion and one that we are all looking forward to.

“We want to finish the season on a positive note and we will train hard this week to give us the best possible chance of winning.”

The 21-year-old insists Valkyries need to believe in their own abilities in order to overcome Bristol, who have defeated them twice in the league this season.

She explained: “We need to go into the game with confidence and believe in ourselves.

“We have been caught out too many times when we are flat and if we play good rugby for 80 minutes then we are really hard to beat.

“Bristol have beaten us twice this season so now it’s time for us to show them what we are capable of.”

Valkyries fell short of victory despite putting in a brave performance against Aylesford Bulls Ladies at Surrey Sport Park on Sunday in their final league game of the season.

And Gill believes their never-say-die attitude is key ahead of this weekend’s final.

She added: “There are plenty of positives that we can take from last weekend. It’s a disappointing result but the main thing is we didn’t give up.

“There were things in the game that we can improve on but we showed our heart, kept pushing throughout and finished on a high.”