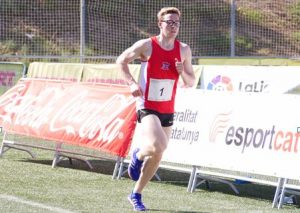 The duo will be hoping to continue their good run of form in California following successful 2016 seasons. 21 year-old Varley claimed the British Modern Pentathlon title last year before finishing as the top British athlete at the Junior World Championships in September whilst Pillage, 18, recorded individual top 10 finishes in both the Under 19 World and Under 19 European Championships.

Pillage, who transferred to Pentathlon GB’s National Training Centre in Bath last September will be joined in the men’s team by Sam Curry, Tom Toolis and Jamie Cooke. 23 year old Curry, who is currently studying for a Masters degree at Kings College London, claimed victory in the first British National Ranking Competition of 2017 whilst Toolis finished as the top British male athlete in the first international of the year in Hungary last month. 2016 Rio Olympian Cooke heads into the event having won the past two World Cup events – 2016 World Cup 4 in Kecskemet last April and the 2016 World Cup Final in Sarasota in May.

In the women’s team, Varley will be joined by Gravesend’s Kate French, Clitheroe’s Samantha Murray and Dorking’s Francesca Summers in a star-studded GB line up. French secured victory at the first National Ranking Competition of 2017 ahead of Varley, Murray and Summers. It means that the top 4 finishers from both the men’s and women’s events at the first 2017 British National Ranking Competition will be heading across the pond to represent Pentathlon GB.

The World Cup will see French make her first international appearance since the Olympics whilst 2015 Junior World Champion Francesca Summers returns to the Pentathlon GB ranks after suffering an injury mid-way through the 2016 season. Two-time Olympian Samantha Murray, who claimed silver at the UIPM Champion of Champions in November, will also make her first international appearance of 2017.

Pentathlon GB athletes have a great track record competing in the USA in recent years, most notably Jamie Cooke becoming the first British man to win a World Cup Final in Florida last year. At the first World Cup of 2015, Cooke and Murray both claimed victories in Sarasota whilst Kate French was also on the podium that day, taking bronze. Meanwhile, in 2013, Joe Evans claimed bronze in Palm Springs on his World Cup debut. The class of 2017 will be hoping to continue their predecessor’s success stateside this month.

The competition in Los Angeles starts the 2017 World Cup season with further World Cups following in Cairo (22nd-26th March), Drzonkow (4th-8th May) and Kecskemet (25th-29th May) before the World Cup Final in Druskininkai, Lithuania from 23rd-25th June.

The schedule for World Cup 1 from Wednesday 22nd to Sunday 26th February 2017 is as follows: