The 2016 World Rowing Cup season wrapped up yesterday (Sunday) in Poznan, Poland with rowers racing for the last time internationally before the Rio 2016 Olympic Games.

New Zealand topped the overall medals table with gold medals in five of the Olympic boat classes and, at the end of the three World Cups, New Zealand had the overall highest number of World Rowing Cup points, with 119. Great Britain was second and the Netherlands finished third.

The New Zealand golds included one in the lightweight men’s four when the crew beat Denmark and Great Britain to the line. A full 2000m duel between New Zealand’s Mahe Drysdale and Croatia’s Damir Martin in the men’s single sculls earned New Zealand another gold as Drysdale got to the finish line just a stroke ahead of Martin. Great Britain’s Alan Campbell was third. 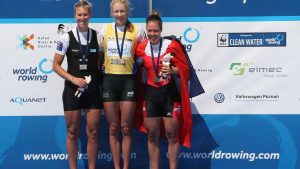 Staking her claim on potential Olympic gold was Australia’s 2015 World Champion Kim Brennan in the women’s single sculls. Brennan met the 2014 World Champion Emma Twigg of New Zealand for the first time since 2014 and showed her dominance by leading from start to finish. Twigg earned silver with Jeannine Gmelin of Switzerland taking bronze.

Eric Murray and Hamish Bond of New Zealand retained their unbeaten record in the men’s pair by finishing ahead of Australia and Great Britain. In the men’s double sculls Robert Manson and Christopher Harris of New Zealand led to the line over Great Britain and France. And the final Olympic boat class gold medal for New Zealand went to their women’s eight. Their win was the first-ever international win in this boat class. Great Britain finished second and the Netherlands was third.

A new World Cup Best Time was set in the women’s pair when the reigning World and Olympic Champions, Heather Stanning and Helen Glover of Great Britain were pushed to the line. This adds to Stanning and Glover’s successful record which includes them holding the World Best Time. In the pair, New Zealand was second and Romania took third 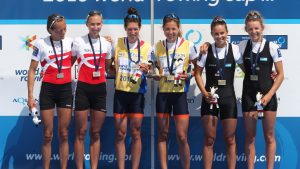 Stiff competition in the lightweight women’s double sculls pushed Maaike Head and Ilse Paulis of the Netherlands to a new World Best Time and World Cup Best Time. Head and Paulis finished ahead of Denmark’s Anne Lolk Thomsen and Juliane Rasmussen who were second and the World Champion New Zealanders, Julia Edward and Sophie MacKenzie who finished third.

The World Rowing Cup series was launched in 1997 and consists of a series of three events. The overall World Rowing Cup winners are determined after the third event. This year, the three stages of the series included Varese, Italy (15-17 April), Lucerne, Switzerland (27-29 May), Poznan, Poland (16-19 June). The Poznan World Cup included para-rowing races.

Report courtesy of World Rowing where you can find more information on this event.