Goals from Lidewij Welten and Maartje Paumen  either side of half time fired the Netherlands to a 2-0 win over Great Britain in the women’s Hockey Champions Trophy. The Dutch made it two wins from two with a superb display, keeping the hosts at bay to take the win. 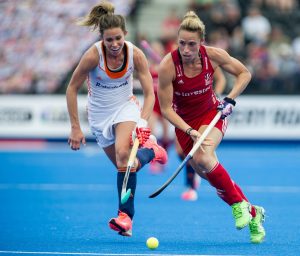 The first real threat of the match came from a Netherlands penalty corner. Paumen who helped herself to four goals yesterday, took the shot but Maddie Hinch turned it over the bar with a fine save. The Great Britain goalkeeper was called upon again moments later, making a good smothering block to deny Maria Verschoor.

The Dutch weren’t having it all their own way and Great Britain created a good chance with five minutes left in the quarter. Lily Owsley broke through and lifted the ball over Joyce Sombroek only to see it hit the crossbar and bounce away to safety. Owsley then thudded another ball into the goalkeeper’s pads but neither side could break the deadlock in the first quarter and it was 0-0 after 15 minutes.

At the start of the second quarter Alyson Annan’s side won another penalty corner. Eva De Goede played a pinpoint pass to the back post for Welten to touch in and give the visitors the lead. Danny Kerry’s team immediately hit back and won a corner at the other end. Giselle Ansley unleashed a rocket strike but Sombroek got everything behind it to save. Great Britain employed a high press, pushing the Dutch backwards but their solid defence held firm and it remained 1-0 at the interval.

In the third quarter some determined work by Georgie Twigg earned Great Britain a penalty corner. Crista Cullen flicked the ball towards the bottom corner but Sombroek made a superb save, stretching out a right leg to keep it out. With three minutes left in the third period it was the Netherlands’ turn to shoot from a set piece. De Goede went direct to goal but Hinch made the stop, clearing the danger with a big boot. Great Britain went into the final quarter still trailing but very much in the hunt for an equaliser.

The Dutch immediately took the sting out of the contest in the final quarter, keeping the ball and holding Great Britain off. They earned a penalty corner after a few minutes had elapsed. Paumen went high but her effort flashed wide of the target. Undeterred, Great Britain hit back and thought they’d won a penalty corner. The Netherlands asked for a video referral which was upheld and the corner overturned.

The Oranje used their referral to good effect again just minutes later, gaining a penalty corner thanks to the video umpire. After the first effort was charged down the corner was re-awarded. This time Paumen got the better of Hinch with a low shot to make it 2-0.

Cullen fired a drag flick wide of the target for Great Britain in the closing stages and Kitty van Male stung Hinch’s pads after a good solo run but there was to be no late twist and the points went the way of the Netherlands.

In the day’s early match, Argentina beat USA 4-1 thanks to a hat-trick from Carla Rebecchi and another from Maria Granatto.

There is a rest day tomorrow before the action resumes on Tuesday.

Alex Danson (pictured in lead photo) told Great Britain Hockey afterwards: “We are disappointed with the result. We weren’t good enough with our core skills today, but we’ll debrief thoroughly and make sure we come back stronger for the next game. The tournament has only just begun and there’s a long way to go yet.”

“We train for tough tournaments like this, so we’re physically in very good shape. The Netherlands played very well today, so all credit to them, but we’re fit enough, strong enough and good enough to bounce back from tough games, so we’ll come out fighting for the next match.”

“Some of the positives from the game are that when we’re nice and connected, when we play through the lines, we look very good and very attacking. We were quick on the counter today, so that’s a positive we’ll take, too. We’ll tidy up in a few areas, and hopefully that’ll give us the result from the next game.

“Tomorrow is a day to recover, to make sure we’re in the best shape mentally that we can be for the next match, and then we’ve got an evening game [against New Zealand] on Tuesday.”

Starting XI vs. The Netherlands