Yeovil Town Ladies players Kelly Snook (photo above) and Jessie Jones will be joining up with the England U18/19 Development Camp this week.

Snook, who was originally placed on Standby for the squad, has recently got the call up, where she will now join Jones from Wednesday this week. 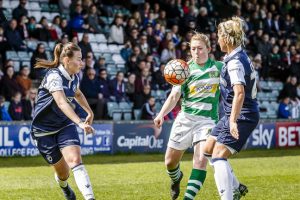 Jones, who has already been involved at U15 and U17 England camps, said “I’m looking forward to meeting up with all the girls again, training everyday and working hard.”

Manager Jamie Sherwood praised both Snook and Jones, but also gave recognition to the club and how it is developing these young players saying “It’s good recognition for what the club have done over the last 18 months.

“We’ve really tried to work on developing the structures within the club to produce stronger, more technically robust and tactically aware players.”

Sherwood went on to say “Have an open mind, take on board everything that the coaches say. From every session, take at least two things away that they can improve on and two things that they did really well, and the biggest thing for me is to have a smile on your face and do yourselves proud.”