Great Britain Head Coach Danny Kerry has named the 18 athletes who will take part in the Women’s Hockey Champions Trophy in London. 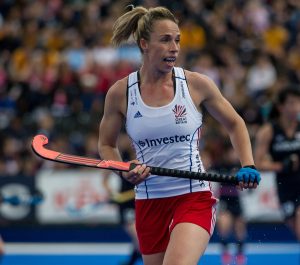 Kerry’s side features a number of experienced heads including Captain Kate Richardson-Walsh who is heading into her seventh Hockey Champions Trophy.

The tournament runs from 18-26 June, following directly on from the men’s event at the same venue from 10-17 June.

The squad has a number of players who have competed in the tournament multiple times already. As well as Kate Richardson-Walsh’s six previous appearances, Alex Danson and Laura Unsworth have appeared in the competition five times already. Georgie Twigg, Helen Richardson-Walsh and Crista Cullen have all competed in the tournament four times. Each of those players collected a silver medal back in 2012; Great Britain’s best-ever finish.

Canterbury’s Susannah Townsend is poised to reach 100 international caps at the competition. The talented No9 currently has 95 appearances to her name.

Ahead of the tournament, Great Britain Coach Danny Kerry said: “We have selected a complimentary blend of combinations that is adaptable to the differing challenges we will face at the Champions Trophy. We have creativity, pace, and assuredness across the lines and we are all looking forward to the opportunity to play again at Lee Valley in the wonderful Olympic legacy venue.

“The Champions Trophy this year will be interesting as I believe all of the teams competing are capable of winning the prestigious trophy. That should make for tight games decided on the finest of margins.”

The finals day on Sunday 26th June promises to be a showpiece occasion, and tickets for this day are on sale now. Saturday 25th is already sold out so act quickly to secure the best possible seats, with prices starting at just £5.