Four University of Bath students were involved in a dramatic 25-25 draw for England Women’s U20s against France on Saturday.

Sport Performance student Sydney Gregson, supported by a Trendell Sports Scholarship, started at full-back in a match which saw England lead 17-3 at half-time before the French hit back.

A try in the dying seconds rescued a draw for the resilient hosts, who had Jessie Hood, Chantelle Miell and Lottie Holland on the bench.

All four, who play their club rugby for Bristol RFC, are supported by the University’s Dual Career programme and the Sport England Talented Athlete Sponsorship Scheme (TASS).

England U20s will face France again on Saturday, March 19, this time away at Chartres RFC. 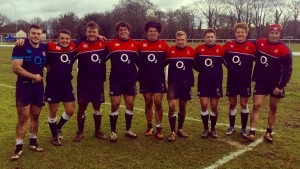 Meanwhile, players from the University of Bath rugby team got to take on some of the best in the game when they took part in an England training session.

Eddie Jones and his England team used the Sports Training Village facilities to prepare for their RBS Six Nations match against Wales on Saturday, March 12 at Twickenham.

And as part of their on-pitch training, they invited nine rugby-playing students to help with the drills.

“It was a great experience for all of the University of Bath players involved as they got to tackle some of the best in the game.”

Tags: rugby, U20, University of Bath