The ECB has today announced the England Women’s Academy squad to travel to Sri Lanka at the end of the month to play in a tri-series against their Australian counterparts – the Commonwealth Bank Shooting Stars – and Sri Lanka Women “A”. 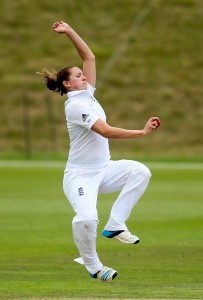 “The volume and standard of international women’s cricket has stepped up a gear over the last 18 months, and it is therefore really important that we expose as many players as possible to overseas conditions and pressurised match situations, so that we are developing a pool of players ready to pull on an England shirt.

“For this England Women’s Academy tour we have selected a squad which includes a couple of more experienced players like Kate Cross and Fran Wilson, alongside some high potential younger players like Sophia Dunkley and Sophie Ecclestone.  The seven tour matches will provide a good challenge for all of them to test their skills and aim to impress ahead of the start of the domestic summer.

“I am also delighted that we have been able to add James Kirtley and Tim Boon as assistant coaches for this tour.  Both have a huge amount of playing and coaching experience, and I am certain that their input will be valuable to all of the players.”