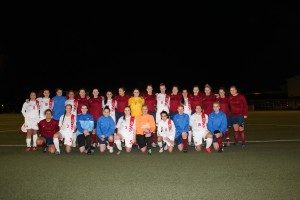 A fast start was rewarded when Ashleigh Mackenzie raced through and slotted under onrushing GFA goalkeeper Kyrelle Revagliatte for an early lead, and the signs looked ominous.

However as the game progressed GFA with their high pressing style came more into proceedings, and Charlyann Pizzarello stood out as a constant danger down the GFA’s left flank. As the first half was drawing to a close, the RAF’s Keri Haywood was released 1 on 1 but was denied by an outstanding save from Revagliatte. The teams went in at half time with the RAF leading 1-0.

The second half was ebbed and flowed until it exploded with GFA’s Lorena Garcia free kick from 25 yards which was expertly tipped over by RAF goalkeeper Lucy Whitfield.

The RAF then gradually took control, and with the GFA defence under heavy pressure Haywood scrambled the goal her play deserved in the 80th minute. Captain Zara Mcintosh rounded off the scoring on 85 minutes, finishing a flowing move from the RAF by turning in the adroit cross of Robyn Stewart.

All in all a close fought, competitive match ended 3-0 to the RAF with both teams able to hold their heads high. Lynette Alvarez of the Gibraltar FA said “It is a great experience for our national team to play against the RAF and you could see tonight the progress women’s football in Gibraltar is making. We look forward to the next challenge”.

The RAF coaches also spent some of their time in Gibraltar working with local children.  You can see that report here.