Great Britain were unable to get off to a winning start in their first outing of the Eurobasket Women 2017 Qualifying campaign after being beaten 78-65 in a hard fought clash against Group C favourites Montenegro. 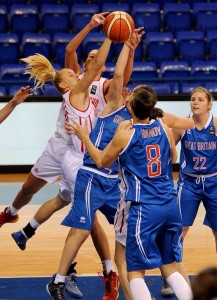 New GB Head Coach, Jose Maria Buceta handed out three debut in Podgorica with Eleanor Jones, Savannah Wilkinson and Jamila Thompson all suiting up for the first time and the team gave their new play-caller plenty of positives in a hugely encouraging performance – despite the loss.

It was certainly an energetic and gutsy first outing for Buceta and his side, who were missing the priceless experience of the injured Stef Collins. They made an excellent start and were immediately on the front foot with six of the first seven points – playing a high tempo and aggressive style which prevented Montenegro from orchestrating their half-court game.

Even when the hosts came alive and moved ahead, a big triple from Jo Leedham tied the scores up at 13-13 and with Helen Naylor stepping off the bench to score as the shot clock ticked down and Rachael Vanderwal sinking a buzzer-beater, GB found themselves 19-17 ahead after the opening ten minutes. 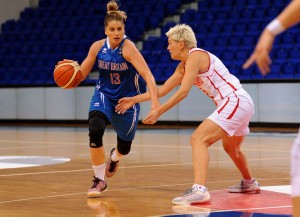 Montenegro then exploded with a 13-3 start to the second period, with GB’s only score in almost five minutes coming via a spectacular triple from way deep by Leedham. The locals continued their ascendancy with some big work at the hoop from the towering Angelica Robinson as they took a 42-28 lead at the break.

GB were much improved when they returned to the floor – cutting the gap to single digits and with four minutes remaining in the period, that was still the case after Chantelle Handy dropped a three-pointer from the wing.

Things got even better in a terrific spell as GB narrowed the deficit to just 58-51 heading into the last ten minutes and when Handy scored prior to Azania Stewart rolling to the hoop – it was suddenly a one-shot game early in the fourth period.

With four minutes remaining, GB were only 67-62 behind and playing some great stuff, but were undone by a trio of three-pointers by Snezana Aleksic as the home side eased to victory in the closing moments.

The returning Jo Leedham led the way for GB with an eye-catching double-double of 20 points and 13 rebounds – as well as handing out five assists. Newly installed captain Azania Stewart posted an excellent cameo of 13 points after going six of eight from the field.

The full box stats can be found here and reaction to the game will follow.

The other Group C game witnessed Italy smash their way to a one-sided 121-38 against Albania.

GB will play their first home game of the campaign this Wednesday in Manchester when they entertain Italy at the Amaechi Centre in a 7pm tip-off.