Thursday 8th October saw GB Police Ladies Football team take on the National Hungarian Police Service in a must win European Qualifier.  The GB squad of 15 were made up from 9 different UK forces. 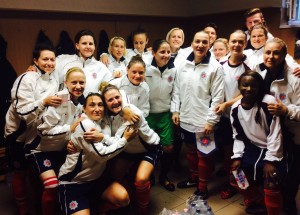 The team warmed up with a short training session before flying to Budapest, where it was straight into match day. With a full Police brass band playing the National Anthems the atmosphere was set for a tough challenge.

The GB team knew that everything was riding on the next 90 minutes. The defence pushed up, the midfield gave the opposition no time on the ball. Passing the ball crisply and utilising the width and pace of the wide players seemed to open up the Hungarian Defence with ease. Peppering the goal and hitting the crossbar it seemed that it was going to be one of those days. On 13mins the Hungarians broke and despite coming from a clearly offside position, play was allowed to continue and they were awarded a free kick. It was struck with power and precision rattling the crossbar, the Hungarian midfield reacted quickest and they scored.

Not letting their heads drop, GB Police kept with the high tempo approach and were soon rewarded with a five passes link from goal keeper (PC Manca) to striker (PC Thorns) finishing, rippling the Hungarian net.

The goal seemed to remind everyone what was riding on the performance and they worked tirelessly in units, not giving the Hungarians the time to settle or get into the game. There were some very tasty challenges, however, the female UEFA referee tried to let play flow. From a great cross a strike hit the crossbar, ricocheted into the penalty area and DS Maggs reacted quickest with a knee putting the ball on target leaving the Hungarians 2-1 down.

Controlled football right through the GB team allowed PC Thorns to add a second goal to her account, with a cheeky lob after breaking through the defence.

For the second half more of the same was the call from Manager, the committed performances by all on the pitch were clear to see. Captain PS Causbrook was substituted at the break due to a thigh strain. PC Herson had a big job to keep the defence tight with PC Butler, PC Colbourne & PC Jackson. Nothing looked like penetrating the back line. Five minutes into the second half a low driving cross from out wide saw the Hungarians diving to block it, however, the pressure was too much and the ball ended in the net – own goal.

PC Philpott was brought on to replace PC Kidd.

The GB players gave limited possession away, correcting the smallest of errors and working all the time together. The pace of both strikers and wide players supported fully by midfielders DS Maggs and PC McKenna meant the Hungarians just couldn’t cope. They did have one further strike on goal which forced PC Manca into a full stretched save, made even more difficult from losing her footing in the goal mouth ground.

Again with fast feet, blistering penetration and strength PC Thorns took control and struck with precision, scoring her hat-trick and the GB Team’s fifth goal. Nothing more than the players deserved.

With 10mins to play the team kept pushing hard, PC Chatterley received a hip height cross from PC Ashton-Jones, which she volleyed with a scissor kick from the edge of the 18 yard box and the keeper was left standing, there was nothing she could do, unfortunately in the celebrations no-one noticed the office side flag had been raised.

The final change came with PC McLean coming on for PC McKenna, who had recovered from a major knee injury to regain her place in this National Police team. Playing the ball around under control for the final few minutes frustrated the Hungarians, but the GB team were not about to conceded another goal.

Manager Fiona Gehring said “Losing this match was just not an option, everything was riding on it. The players put in the best performance I’ve ever seen it was epic. Their passion and work ethic was top class from start to finish. This is the highest level of Sporting Competition for Police Officers. We do all this mostly in our own time and mostly self-funded (limited funding comes from Police Sport UK). We are now looking at developing the team and bringing in a couple more players to strengthen us further, giving us the best chance possible to challenge the likes of Germany, France, & Czech Republic.”

GB Police Ladies Football team are looking for  team sponsorship or donations if you can help you can contact them via the contact page on this website.