Fellow athletes, family, friends and University of Bath staff turned out in force to cheer a full complement of Pentathlon GB athletes into the womenâ€™s final of the Modern Pentathlon European Championships. 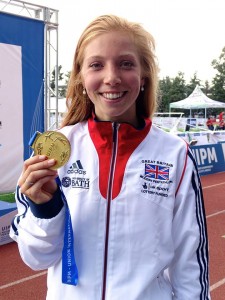 Graduates Samantha Murray, Kate French and Freyja Prentice all successfully came through their qualifying rounds on Friday, as did newly-crowned World Junior Champion Francesca Summers.Â They were roared on all the way by another good crowd at the Sports Training Village and can expect even louder backing over the finals weekend, with tickets for the swimming and fencing on both days having sold out.

Olympic silver-medallist Murray, who was supported by a Santander Sports Scholarship during her Politics & French studies, said: â€śIt is really cool to have the home crowds here, I really appreciate their support.â€ť

Among those providing vocal backing were athletes from the British Bobsleigh & Skeleton Association which, like Pentathlon GB, has its national performance centre at the Sports Training Village.Â World Cup skeleton slider David Swift said: â€śWe have been going to watch the fencing and swimming in between our training sessions.Â We train alongside the pentathletes in the gym and see them around the Sport Training Village, so itâ€™s been great to be able to support our fellow athletes.”

â€śI suppose it is quite similar to us I suppose in that the pentathletes donâ€™t normally get to compete in front of a home crowd, so itâ€™s nice to support them when we can. Itâ€™s always good when you see friendly faces in the crowd.â€ť 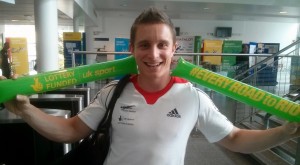 Swift has trained at the University of Bath for the past nine years and has been blown away by how the facilities have been adapted for the Europeans.

â€śWhen I got here at the start of the week I couldnâ€™t believe what they had done out there with the show-jumping arena,â€ť he said.Â â€śIt is really impressive and itâ€™s great to have such a major sporting event here.â€ť

Families are also taking the chance to cheer on their loved ones, with Summers â€“ who won the World Junior Championships in Mexico City earlier this month â€“ being supported by her grandparents, parents and sisters.

Sisters Charlotte and Georgina are pentathletes themselves and are in the Pentathlon GB Youth squad which is flying out to compete in Argentina next week. Â â€śItâ€™s inspirational to be watching our sister compete at the European Championships,â€ť said Charlotte.Â â€śWe didnâ€™t see her when she won the Junior World Championships in Mexico so itâ€™s great to be able to watch here.Â Iâ€™m so excited to be going to Argentina. Itâ€™s good to see that our hard training has paid off.â€ť

Georgina added: â€śWatching Frankie shows that weâ€™ve got this to look forward to.â€ť

Grandmother Rosemary Williamson travelled from Pyrford in Surrey to cheer on Summers as she qualified from a group boasting the reigning Olympic and World Champions, Lithuaniaâ€™s Lena Asadauskaite and Germanyâ€™s Lena Schoneborn.Â “I’m thrilled to be here to support my granddaughter,â€ť she said. â€śThe venue is fantastic, I love the city and hope the British team do well.”

Kim Myattâ€™s son James, a University of Bath Business Administration graduate, finished fourth in the menâ€™s team relay with Sam Curry on Wednesday.Â â€śI wanted to come and support the girls today,â€ť she said. â€śIâ€™m here all weekend too and we have strong medal chances, so Iâ€™ll be cheering loudly!â€ť

The Manners-Bell family â€“ Sara, John and sons Nicholas (12) and Jonty (9) â€“ from Brinkworth did not have any relatives taking part but do know one competitor well. Â â€śWe came down to cheer on Sam Murray,â€ť Sara said. â€śSheâ€™s helped out with coaching Jonty in his fencing and as weâ€™re local-ish we thought it would be a great event to come and see.Â Jonty and Nicholas are both into running and swimming so we thought today would be inspirational for them.”

â€śJonty represented GB in the Biathle World Championships last year in Pisa and won gold so he could be a pentathlete of the future to look out for!â€ť

Modern pentathlon fan Nigel Dean travelled from Fareham in Hampshire to cheer on the British team and has been impressed by the Sports Training Village.

â€śIâ€™ve followed the sport since the Athens Olympics in 2004 and also went to Beijing and London,â€ť he said.Â â€śI like this venue and find the disabled access is good and people very helpful.â€ť

University of Bath staff have also been taking the opportunity to enjoy some world-class sport in their workplace.Â Research Development Manager Laura Wisby, who was joined by colleagues Gill Overend and Ben Hutchinson, said: â€śWe thought weâ€™d pop over in our lunch break and support the athletes.Â Weâ€™ve not been to a pentathlon event before and it was good fun cheering on the swimmers.â€ť

The action really heats up over the weekend, with eight Olympic qualification places available in both the menâ€™s and womenâ€™s finals.Â Â The men are the first to go for glory, with Pentathlon GB represented by Jamie Cooke â€“ ranked third in Thursdayâ€™s qualifiers â€“ and University of Bath students Joe Choong and Tom Toolis.

Yes, there are lots of fascinating possibilities available to Middleton. The trouble is, the crunch game comes first up. He must pick the side he can trust to produce the goods. In her latest pod Rachael Burford said the No 15 must be safe under the high ball, hence Sarah McKenna. Iâ€™ve seen both Dow and Attwood fail in this respect this season. Wing is a major source of strength with Thompson, Breach, Smith and Dow. Hard to leave out a player who scored 2 unforgettable tries in a world cup final against the worldâ€™s best, and played Woodman off the park in Rotorua. Sad thing is: wingers rarely figure on the bench. If they can offer a second option (full-back) they have a chance. That means Dow. A concern is No 7. I think the management prefer specialist flankers. Once Marlie Packer is counted out, that leaves only Vicky Fleetwood with the necessary pace and know-how on the open-side. Of the ones you mention, Cokayne fits the bill excellently. But sheâ€™s 1st-choice hooker. Has Kerr ever played back-row? Beckett was only filling in in the second row, surely. Yes, lots of talent waiting in the wings. Makes you wonder whoâ€™ll retain their contracts next year. Harriet Millar-Mills was invited in to join the test squad recently.

We are a small group of sports fans who would like to see a little more parity in sports reporting. England womenâ€™s teams have had some wonderful successes in the last years and yet they donâ€™t get the recognition they deserve. We would like to begin to put that right by making them the focus of our website. You can get in touch with us from this page or via twitter

Update on the Womenâ€™s Pyramid of Football ahead of 2020-21 season.