U17 UEFA Championships Elite Qualifying Round

First half goals from Eleanor Ryan-Doyle and Saoirse Noonan gave Dave Connell’s side the three points and set up a critical encounter against the Netherlands on Saturday afternoon. England go on to play Hungary also on Saturday. 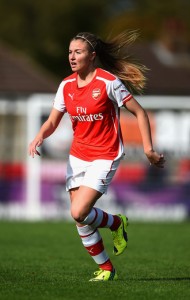 Two goals from Jenna Dear (27′ and 83′) and a penalty from Leah Williamson (61′) completed a convincing victory against Switzerland whose only goal was scored by Marilena Widmer (29′).

Next up for the U19s was a replay of the final 16 seconds of their match against Norway, which they had lost 2-1 after Williamson had her penalty disallowed 6 minutes into overtime. UEFA, after an appeal from the FA, decided that the referee had not followed the laws of the game when she gave an indirect free kick for encroachment, rather than allowing the penalty to be re-taken. To take a penalty at any stage must be nerve wracking, to do so 5 days after the original incident must be, well weird.

The young Leah Williamson showed no nerves at all, she buried the ball into the back of the net (although the Norwegian keeper did get close) and England are through to the Euro 2015 U19 finals, which will be held in Israel in July.

England got off to a bright start, at the City Football Academy in Manchester, in front of a lively crowd of 5,665, with Jodie Taylor scoring after just 1 minute.  Fran Kirby, having set up the first goal then scored herself just 9 minutes later, continuing in the same rich vein of form she is showing for her club.  Shanshang Wang got one back for China and although China continued to press they could not break England down.

Next stop for England, the World Cup Finals in Canada.