A poor start to the match cost England dear as they were downed 55-37 by the Australia Diamonds in the opening match of their autumn tour this morning.

With the reigning Commonwealth and World Champions coming into this fixture off the back of a 4-0 Series whitewash against New Zealand, the opening quarter was always going to be crucial. The in-form Diamonds were immediately on the front foot and continued their sparkling run of form. 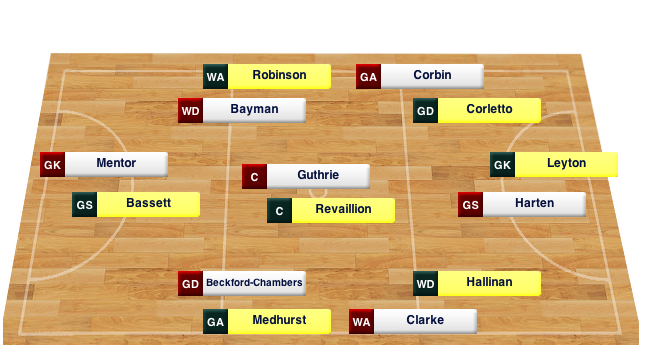 Australia Vs England Starting line up

Despite Jo Harten finding her range early on, England were struggling to take the ball through court to goal with the hosts dominating the play in the mid-court. Geva Mentor and Eboni Beckford-Chambers were keeping the Aussie attack in check and creating turnover ball but the inability to transfer this into goals on the board saw England quickly fall behind.


Madi Robinson was pulling the strings in the WA bib for the Diamonds, helping to cement her Player of the Match award. A dominant end to the quarter saw the hosts draw clear at 18-6, scoring nine goals out of the last ten in the process.

A stuttering start saw Anna Mayes make a change at the start of the second quarter with Kadeen Corbin being sacrificed for Rachel Dunn at GA. The team responded instantly with Harten scoring from range to complete a turnover. A fantastic battle continued to rage between the England defence and Australian attack with Mentor frequently showing her class to take intercepts and rebounds. With a couple of minutes left in the half Ama Agbeze came on for Beckford-Chambers and the ladies in red finished with a flourish to level the quarter and head into the break trailing 29-17.

The start of the second half saw a tweak to the mid-court with Sara Bayman and Serena Guthrie switching positions. The impetus from the end of the first half continued in the third quarter with England now setting the tempo. Ball retention was much better from the visitors and the combination of Harten and Dunn were linking fantastically, the former barking encouragement at her teammates as the gap moved down to seven at one stage. Unfortunately, the impressive Agbeze was struggling and had to be replaced by Beckford-Chambers with a few minutes remaining in the quarter. This halted the England momentum and with Sharni Layton now stealing possession at GK for the Diamonds, Australia were able to level the quarter and retain their 12 goal gap; 41-29 heading into the final fifteen minutes.

The previous two quarters had shown how finely matched these two sides are when each are playing to their potential. A number of changes were made to the hosts’ line-up for the final quarter and those now on court were eager to impress.

Mistakes and turnover ball were becoming more common and the resultant slowing of the pace played into the hands of the Diamonds who were patiently building and punishing England errors. Stacey Francis was introduced at WD and she showed sparks of her defensive brilliance with a wonderful tip which led to Dunn scoring from range. Despite this glimpse of England’s class, Australia took control of proceedings as the game drew to a close and increased the lead to eighteen as the visitors struggled to contain the attacking flair of their opponents. In truth, following a poor opening quarter England were always playing catch-up but performed valiantly in the middle quarters and can take a lot from those passages of play heading into the second and final encounter against the Diamonds this Wednesday.