England made it a perfect ten wins from ten in World Cup qualifying after a comfortable 10-0 dismissal of group minnows Montenegro.

As reported by the FA’s Glenn Lavery in Petrovac, Montenegro

Mark Sampson’s side had already qualified for Canada 2015, with their 4-0 win against Wales, but completed their campaign in emphatic fashion with Eniola Aluko scoring a hat-trick.  This result in Petrovac, England’s biggest win of the campaign, means the Three Lions scored a remarkable 52 goals in Group 6, conceding just once, against Ukraine in June.

Sampson and Co. can now look forward to the World Cup draw in Ottawa on 6 December – but before then is a tantalising friendly against two-time world champions Germany at Wembley on 23rd November. 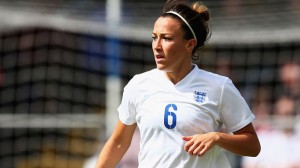 As expected against a team they had defeated 9-0 in April, England were on the front foot right from the off. Jordan Nobbs should have converted Karen Carney’s cut-back after just two minutes and the flag had already gone up when Toni Duggan poked home the rebound.

Last time England faced Montenegro, Duggan broke the deadlock within the first 60 seconds. We had to wait slightly longer for the game’s opening goal in Petrovac, but it eventually came in the eighth minute as Eniola Aluko prodded home Lianne Sanderson’s through-ball.

Fara Williams curled a 20-yard shot narrowly wide of the upright and Sanderson forced Iva Milacic into a decent save at her near post as the visitors set about extending their lead.

Carney, on her 99th international appearance, doubled the lead on 22 minutes, pirouetting on Sanderson’s pass before smashing a shot high into the net from the edge of the box. 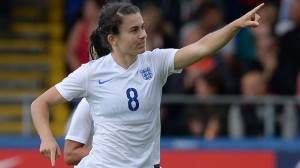 Sanderson was involved in the third goal, too, as Aluko headed home the loose ball after her strike partner’s thumping shot bounced back off the crossbar.

Duggan then hit the foot of the post before Lucy Bronze made it 4-0, tapping home Alex Greenwood’s deep, right-sided cross at the back post to give her side a thoroughly deserved half-time lead.

There was no let-up at the start of the second half as Carney bagged her brace from close range following Aluko’s driving run down the right and cut back from the by-line.

Manchester City striker Duggan netted a hat-trick in April and she got herself on the score sheet against Montenegro again, sweeping into the far corner with her left foot after Aluko’s shot had deflected into her path.

Aluko then went from provider to goalscorer, completing her hat-trick in style. The Chelsea striker dribbled past four players and into the box before clipping the ball beyond Milacic and into the far corner of the net. It was her 13th goal of the campaign

Substitute Natasha Dowie, on for Sanderson, came close to making it 8-0 but she headed Gemma Bonner’s cross just wide of the far post.

Carney had an even better opportunity to make it a nice round 50 goals in qualifying when Irena Bjelica was sent off for handling the ball on the line – but the Birmingham City captain blazed the subsequent penalty over the bar.

Everton’s Alex Greenwood, making her first competitive start, fired home her maiden England goal in the final minute to bring up the half century. Substitute Jo Potter then made it 9-0 in added time before Duggan picked up the ball straight from that restart, drove forward and smashed home number ten. 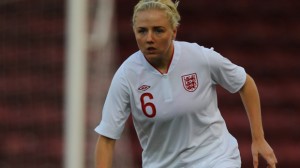 It was England’s biggest win of these qualifiers and the perfect end to a their campaign.