Team Bath Netball head into their final home game of the 2022 Vitality Superleague season this week with their play-off fate still in their own hands after digging deep for an important away win over Celtic Dragons. 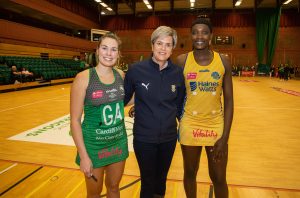 The Haines Watts-sponsored Blue & Gold overcame a slow start in Cardiff on Monday to build their way back into the game and take a 14-12 lead after the first quarter. They stretched that to five goals at the halfway mark and were able to maintain that margin against a committed home side, coming away with a hard-earned 49-44 victory.

That means they go into Friday’s game against Wasps at the Team Bath Arena (7pm centre-pass) with a three-point lead over fifth-placed Saracens Mavericks, who play their penultimate match of the season at Leeds Rhinos on Saturday. Team Bath and Mavericks then go head-to-head in their final fixture.

Anna Stembridge, Team Bath Netball Superleague Head Coach, said: “Every point matters, every goal matters so we are absolutely delighted to have got the win at Dragons. They have run a lot of big teams close over the past few weeks, only losing by one or two goals, so we knew they would provide us with a real challenge.

“It was a physical encounter and we had to ride the storm, both in the way Dragons started and how they came back at us in the closing stages, but when the pressure was on we stepped up at both ends of the court.”

Team Bath knew they needed a win after Mavericks had drawn level on points with them over the weekend but found themselves trailing 5-0 with as many minutes on the clock. An early change saw Hannah Passmore come into the attack and she went on to convert 100 per cent of her shots as the visitors rallied to lead by two after the first quarter.

Both teams excelled defensively but Team Bath were able to push their lead out to five and increased it to eight in the final quarter before Dragons produced a strong finish to cut the deficit.

Dorette Badenhorst, Head Coach of the South African netball team, was at the game and saw another dazzling display from SPAR Proteas goal-keeper Phumza Maweni alongside England goal-defence Layla Guscoth.

“Phumza was absolutely sensational again and we were prolific defensively,” said Stembridge. “It’s difficult to take the ball off Dragons, they keep the play quite short, but we worked hard to gain possession and then used it well in attack.

“The win sets us up well for Friday against Wasps. Like Dragons, they are a team who have started to find their form over the past few weeks and they only lost by two to Loughborough Lightning at the weekend.

“We need the points, though, and we want to put on a spectacle for our fans in the last home game of the season. They have come out in big numbers all year to get behind the team and we want to reward them with a good performance.”

The Wasps match will be preceded by a chance to watch Team Bath’s U21s – fresh from winning two bronze medals during their most-successful NPL season to date – take on Celtic Dragons on the Team Bath Arena court. Centre-pass is 4.30pm and admission is free.