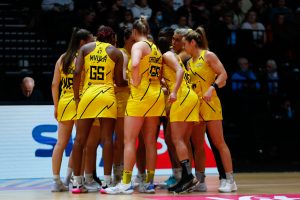 (Photo by Stephen Gaunt of Touchlinepics.com for Manchester Thunder)

Supporters of Manchester Thunder, netball and sport are being urged to get behind the city’s Superleague team as netball’s top domestic competition prepares for its new season, which starts this weekend.

After two years without any home games thanks to the aborted 2020 season and 2021 being played behind closed doors at a central venue, 2022 marks the return of live netball in Manchester and Thunder’s players, coaches and directors are encouraging people to turn up and show their support.

“I am so excited to have supporters back, to feel the buzz from the crowd and the energy that they bring. It’s so important that we have a full venue so, please, I implore you to get down to your local team and support us in the coming weeks.

Matches take place at Belle Vue and a huge amount of time has been spent ensuring the venue is as safe as possible for the return of fans. The first game will be against Surrey Storm on Saturday 12 February with tickets starting from just £10.

Thunder managing director Debbie Hallas hopes people secure their seats but she understands some will be nervous: “The world has changed so much over the past two years so I completely appreciate people might worry about coming back to an indoor venue to watch live sport. But we have done everything we can to make the venue as safe as possible and I can promise a brilliant experience of live sport and entertainment.

“We make the majority of our money from ticket sales so not being able to have games at home has had a huge impact on us as a team and a business. With more attention on women’s sport than ever, and the Commonwealth Games just months away where netball will play a huge part, we need to get fans back to ensure we have a strong future.

“My message to everyone – whether you’re a Thunder fan or not, a netball nut or not – please come down to Belle Vue, watch a match and enjoy the experience. You’ll get a warm, safe and secure welcome and I am sure you will want to return.”

Tickets are on sale now at www.manchesterthunder.co.uk/tickets.

With thanks to Manchester Thunder