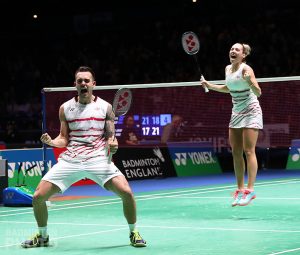 The Team GB Olympians have competed on the HSBC BWF World Tour together since 2013 and have achieved remarkable success throughout that period.

Having first discovered her passion for playing at school, Gabby attended a local club alongside her sisters and her talent then began to show. With 435 career wins to her name, in both mixed and women’s doubles, Leeds-born Gabby will look back on her career with great pride.

Gabby first joined the England set up in 2006 and won a breakthrough world junior silver medal, with Chris, in 2007 and has not looked back since. For husband Chris, 2007 was also the year he earned his first England senior cap and his career grew from strength to strength from that moment on, achieving a remarkable 468 career wins.

In 2010, Chris and Gabby made their Commonwealth Games debut helping Team England to a bronze medal in Delhi.

Alongside his then Mixed Doubles Partner, Imogen Bankier, Chris took the World Championships in London by storm in 2011 achieving a silver medal, and 12 months later, made his Olympic debut for Team GB in London in 2012, again with Imogen. Chris represented Great Britain at the Rio Games in 2016, this time alongside Gabby. 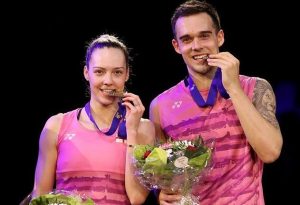 2013 saw one of their proudest moments though, as they won their first SuperSeries title at the Hong Kong Open.

In 2014, at the Commonwealth Games in Glasgow, Chris and Gabby were part of the Team England that won a team silver which they then followed up with individual gold in the Mixed Doubles event.

The following year, Chris and Gabby won the BWF World Tour Finals in Dubai, the first English players to claim this prestigious title and in 2017, Chris and Gabby again made England proud when they returned to Glasgow for the World Championships and took a bronze medal.

In the same year, they won their first European Championships gold medal, with victory in Kolding, Denmark.

2018 saw the duo successfully defend their Commonwealth Games title on the Gold Coast, as well as retain their European gold medal.

The pair’s final professional competitive match was at the 2021 European Mixed Team Championships qualifiers in December. Gabby then suffered with Covid and was forced to pull out of this year’s YONEX All England Open Badminton Championships.

With the pair currently occupying the 14th world ranking spot in mixed doubles, it is time for them to reflect on the past decade and their incredible achievements along the way.

Gabby said: “What an unreal journey the past 15 years have been! I feel incredibly grateful to have had the opportunity to be able to do what I love for so long.

“I’m extremely proud of what we have achieved, and the life lessons badminton has taught me along the way.

“I’ve been fortunate to travel the world making many friends along the way. I will forever cherish the magical moments like standing on the podium alongside my husband and celebrating with our team.

“Finally, I’d like to say a huge thank you to everyone that has supported me throughout my career. It really means a lot and never went unnoticed.

“I am super excited for the next adventure and will always keep a keen eye on the sport I will forever love.”

Chris added: “My journey in badminton over the past 15 years has been everything and more than I could have ever hoped for as a young boy who fell in love with the sport at such a young age, however I now feel this is the right time to step away from competing.

“I’ve always felt extremely privileged to be able to do something I love for my job & I leave the sport knowing that I did everything I could to make the most of this opportunity.

“Badminton has given both Gabby & myself so much. We have so many amazing memories, experienced some unbelievable experiences & met so many incredible people along the way. All this while travelling the world together.

“The feeling of competing at the very peak of the world level was always my dream and happily we got to do that for an amazing 10 years. The moments standing on the podium with a gold medal around your neck is undoubtedly a feeling I never forgot and will always look back on them with pride.

“Of course, being an athlete isn’t always easy and I want to thank the people who have always been there supporting me, not just in my successes but throughout my whole career. My family have always been unbelievable and made it possible for me to achieve what I have.

“I’m super excited about the next chapter in our lives and everything it brings.”

Badminton England Chief Executive, Adrian Christy, paid tribute to both players: “This is a very sad day for the world of badminton, for Badminton England and Team GB, and also for me personally, such is the respect we all have for two outstanding players and wonderful people who it has been my privilege to know.

“I cannot thank Chris and Gabby enough for the pleasure, excitement and memories they have given to so many fans over the years.

“Chris and Gabby wore the England and GB shirt with great pride, they waved the flag for English badminton around the world for more than a decade and they will go on to achieve amazing things in their future careers – I just hope they will remain in badminton in some capacity, because they are both too important to the future generation of English badminton.

“English badminton has been lucky enough to have many players who have been exemplary role models for our game; Chris and Gabby have been incredible ambassadors for us, not just at international level but how responsive they have been to support our grassroots programmes and community badminton initiatives in clubs and schools.

“I wish Chris and Gabby all the luck and success for their future – thank you for the amazing memories.”

Head Coach, Pete Jeffrey, added: “I feel very fortunate and honoured to have been a part of Chris and Gabby’s entire senior career. Their relentless drive to improve, together with their tremendous work ethic, have been the cornerstone of their numerous successes. I have witnessed first-hand how much they have given to achieve the enormous accomplishments they deserve, and I can certainly say they gave it their all.

“I would like to congratulate them on their incredible legacy that they leave behind and pay tribute to their families and coaches for the support they have provided them over the course of their journey. I personally wish Chris and Gabby every success for whatever path they choose to take next.”

Jon Austin, Performance Director, said: “I have known Chris and Gabby since they were young, enthusiastic teenagers who from the outset showed they had the unwavering determination to succeed.

“I have closely followed their careers and on occasions have had the pleasure to help and support them in some small way. They are both credits to the Great Britain and England shirts and have an enviable record of success over more than a decade. We will miss them both but know they have every intention to stay connected to the sport that has consumed much of their lives to date.”