Female refereeing has made huge strides in recent years and creating opportunities is an essential part of growing this area of the game. 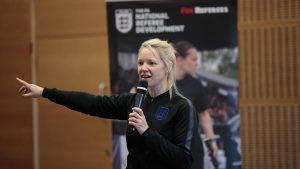 In recent weeks we’ve been working with a number of female referees who are at varying levels of their careers and who officiate across all levels of women’s football, from grassroots through to the elite.

Last month, we hosted our third annual grassroots development event at St George’s Park. It was another inspirational event for us, with over 100 female referees in attendance, many of which are all within their first few seasons of officiating.

Referees from as young as 14 spent the day with FA staff, tutors and senior referees, and our aim was to provide referee education and to support their development.

But most importantly, it’s an opportunity for the girls to network, engage and share their experiences with their female colleagues from around the country.

Hearing some of the feedback, with several attendees personally sharing how the day reaffirmed their ambition to make a career out of refereeing, it really shows how powerful these events can be for our young, aspiring officials. Helping to develop and encourage the next generation of female referees is a core focus for us. 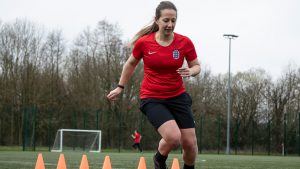 And last weekend, we hosted the senior women’s refereeing camp at Warwick University, which is one of two annual events we host in addition to regional training days.

It’s attended by all female referees operating within the Barclays FA Women’s Super League and FA Women’s Championship and includes fitness and nutrition sessions, as well as bespoke development and education workshops, with information drawn from the findings of the WSL’s evaluation system, observer reports, and club feedback. It’s so valuable to give the referees opportunities to learn and reflect from each other.

These events continue to be a great success and to see the ongoing development of female officials gives us great pride, and the improvements are clear to see.

The Barclays FA WSL now implements the same match evaluation system that is used in the Premier League, which brings many benefits and continues to improve standards. Using match footage, it allows video analysis of every decision/non-decision made by officials, offering forensic analysis of refereeing in elite women’s football for the first time. 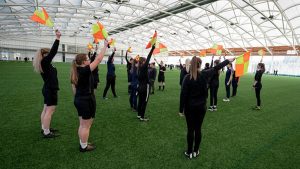 Three quarters of the way through the season, what we’re seeing through the match evaluation system is that a large proportion of decisions are correct. On average, match officials make over 340 decisions per game, and 98.3 per cent of all decisions in the league so far this season have been correct. Broken down, this amounts to:

This indicates the level of decision making is very good and is continuously improving, much like the standard of the women’s game as a whole. It gives us a strong baseline to work from as we try to ensure our referees are given adequate development opportunities and support to ensure they meet the growing demands of the game.

A big part in ensuring the continuous improvement in the standards of refereeing is providing all Barclays FA WSL match officials with an individual specialist coach who offers one-to-one support prior, during and post-matchdays.

We’re mindful that while it’s important for match officials to understand if an incorrect decision is made, the emphasis is put on understanding the rationale behind why an individual makes a decision, providing thoughts on how we can continue to improve and develop.

We also provide bespoke training camps both nationally and regionally, focused on women’s football, while the FA’s refereeing department works closely with all Barclays FA WSL clubs, analysing feedback after every match to ensure we are adhering to the expectations of the league.

Four female referees and five assistant referees are now on the FIFA list of match officials and it’s our ambition to ensure we have a pathway in place, so people feel refereeing in the women’s game is viable career option.

In last year’s Gameplan for Growth update, the number of referees in the women’s game was up 13 per cent to 1,727 and, while a further update will be released in the coming months, I can share that there has been a 20.6 per cent increase in female referees from February 2019-February 2020.

These figures, along with an ongoing commitment to supporting and developing female referees, show that officiating across all levels of the women’s game is in a strong place and we are well positioned to see this strengthen even further.

It’s a very exciting time for the women’s game and we will continue to work tirelessly to raise these standards.