England and Great Britain Hockey are delighted to welcome goalkeeper Maddie Hinch back into the women’s central programme from early June.

Hinch – the FIH world goalkeeper of the year for the past three years – will be back in contention for Great Britain in the final FIH Pro League games of the year, as Mark Hager’s side take on the Netherlands and Australia in London, as well as the final double header against New Zealand at the Twickenham Stoop on Sunday 23 June.

Hunch has spent some extended time away since playing for England in last summer’s Vitality Hockey Women’s World Cup in London. Following more than 10 years’ immersion with the central programme, Maddie has been playing for Stichtsche in the Dutch league, whose season concludes shortly.

Maddie said, “After ten months away from the international game, I am absolutely delighted to be back with the Great Britain Hockey programme. My time away has allowed me time to recharge, mentally and physically, and renew my ambitions in the game whilst continuing to play at the highest level of women’s club hockey over in the Netherlands.

With that, I feel I’m in a great place to re-join the group and hope to be part of what is an incredibly important journey ahead.  Should I be selected, I’m very excited about playing in the FIH Pro League in London – and to try to help the team as we look to qualify for Tokyo 2020 and beyond.

“With a new global league, new coach and an Olympics next year, this is a very inspiring time for the sport and I’m looking forward to hopefully playing my part as much as I can.”

Women’s Head Coach Mark Hager said, “I’m delighted to welcome Maddie back, she is a world class goalkeeper and I’m looking forward to working with her, as opposed to having to try to work out how to score past her! Having recently met with Maddie, she clearly has huge desire to be back, and it would seem that an extended break has been a great step for not only Maddie, but also the programme and the opportunity it has provided our other goalkeepers.

“We fully recognise her qualities, but at the same time our goalkeepers have done very well since I came in, so she will have to earn her place in the team on merit, and hopefully give us some tough decisions to make.”

GB Hockey Performance Director Ed Barney added, “We strive to support all our athletes and staff to have an extended, fulfilled and ultimately enjoyable time with England and Great Britain Hockey. Whilst we will always make decisions that put the team first, it’s great that we have been able to support Maddie on an individual level, with some more bespoke and extended time away from the programme.

“Everyone is looking forward to having Maddie back in the programme, which will add to the professionalism and standards that the women’s programme live day-in, day-out. It will be great to see Maddie back out on the pitch if selected on 7 June against Germany.”

Maddie will go onto a full time contract, funded by UK Sport and the National Lottery.

The 30-year-old played a crucial part in the GB women’s team’s first ever gold medal at the Rio Olympics, preventing the Netherlands from scoring any of their four shootouts. Along with the rest of the team she was then made an MBE for services to hockey.

She was also pivotal in the Unibet EuroHockey Championships win at Lee Valley Hockey and Tennis Centre in 2015, and to date she has 133 caps for Great Britain and England.

Her earliest possible appearance could be the home game against Germany on Friday 7 June, followed by a match against Australia two days later on Queen Elizabeth Olympic Park.

She could then face old foes the Netherlands on Sat 15 June, followed by the ground-breaking New Zealand double header on Sunday 23 June at the 14,000-capacity Twickenham Stoop.

Tickets / Premium Experiences are available for each of these home games, as well as this weekend’s matches with Argentina and Belgium – go to See Tickets for details. 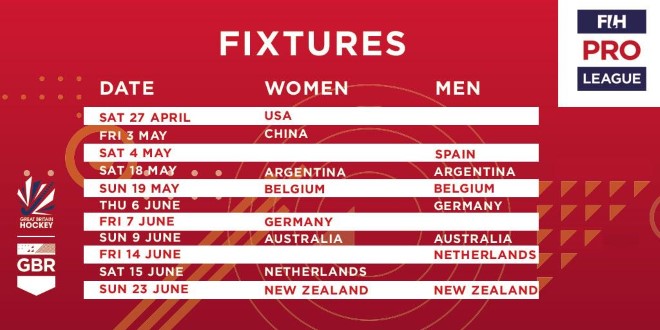