Loughborough Lightning women’s rugby squad have set their sights on a win this weekend, as they return home after two away games on the trot. 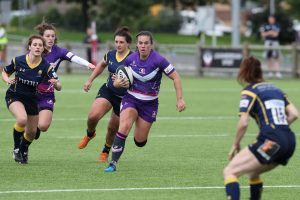 Welcoming Richmond Ladies to Loughborough University, the girls in purple are hoping to bounce back after a disappointing defeat to DMP Sharks last weekend. Gaining four wins from their opening six matches, Richmond have shown that the side that finished sixth in the final edition of the Women’s Premiership are now genuine title contenders, sitting comfortably in the top four. On the face of it, that shouldn’t be too surprising for a side that claimed the English title five times between 2010 and 2016.

A promising start last weekend at DMP Sharks saw some dominant play from the Lightning girls however with the opposition yet to secure a win this season, hunger took control of the game and Lightning fell to defeat. With four of the starting line-up missing due to international duties, Lightning have called upon some fresh faces and young talent to guide them through the match this week.

Head Coach Rhys Edwards looks ahead to tomorrow’s match;  “Richmond this weekend are going to be another difficult challenge, just highlighting the competitiveness of this new Tyrrells Premier 15s League. The last two weeks have been challenging, with a particularly difficult loss to DMP Sharks, but the squad have responded well and had a positive week this week bringing a new energy to training.”

With key players also returning to the side from injury, Edwards remains positive at the task ahead; “It’s great to welcome back Olivia (Jones) and Sarah (Hunter) to the pack. Richmond in particular are going to be a physical team up front and it’s important that we match them physically to enable us to control the game.

“I’m particularly looking forward to introducing Carys Williams for her debut. She has worked very hard from her injury since joining us in the summer and is a going to add some valuable experience and quality to back line.”

Lightning kick off at 3pm on the 1st XV pitch. Why not head over to Loughborough University on Saturday 4th November to witness all the action.