England were defeated by the USA in a dramatic penalty shootout in the Hockey World League Semi-Finals. 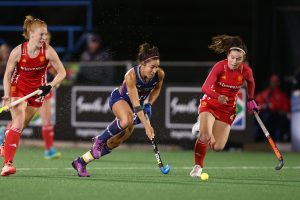 US captain Melissa Gonzalez netted the winning penalty despite the best efforts of Maddie Hinch, who made four stops in the shootout, including a sensational spinning stop which you can see here.

Hannah Martin had given England the lead in normal time, a lead that they kept until the closing minutes, but Jill Witmer levelled to send the game to a shootout.

It was England who started brightest, immediately pinning the USA back with consistent pressure on their defensive line. The first chance of the game fell to Danson but her shot from a tight angle found the side board. The USA responded but it was England who again went closest to taking the lead; Emily Defroand stole possession in midfield and the counter attack saw Zoe Shipperley with time to shoot but her effort snuck wide of the right post.

Shortly before the first break England were again frustrated not to pull ahead, Danson danced into the circle before unleashing a reverse stick strike which was kept out by Jackie Briggs.

Immediately after the restart England took the lead in stunning fashion. Townsend carried the ball before finding Bray in the circle, and a clever reverse pass then released Martin who finished coolly.

Both sides were showing exactly why they had progressed to the semi-finals of the tournament, the game being played at a fierce pace with plenty of chances but at half-time the score remained 1-0.

There continued to be little between the teams in the third quarter but the USA did begin to take control of the encounter enjoying more possession, however determined defensive work from England kept their chances to a minimum as they entered the final fifteen minutes still in the lead.

It had been a relatively quiet night for Maddie Hinch but in the final quarter she was called into action. From three penalty corners in quick succession she made five saves including one stunning triple to keep England’s lead intact.

Lily Owsley was shown a yellow card for a deemed push in the closing stages and with three minutes remaining a reverse stick strike across goal deflected into Hinch and dropped to Witmer to tap home and force a shootout.

Gonzalez stepped up first to score and put the USA ahead but from here on it was all about the goalkeepers, Hinch and Briggs saved the next seven penalties between them with some stunning saves.

Sarah Haycroft kept her cool to level with England’s fifth penalty but Danson’s sudden death effort was saved. Gonzalez stepped up again and finished high into the top corner to send the USA into final.

Assistant Coach David Ralph – who led the team in the absence of the unwell Danny Kerry – said, “We are obviously disappointed with the result tonight. It was an intense, tight game that unfortunately didn’t go our way. This is a great group of players though and we will regroup and look forward to playing Argentina on Sunday.”

Sophie Bray added, “It’s an honour to receive my 100th cap for my country. I have a lot of people to thank for helping me on my way. We are gutted with the result but will be back on Sunday ready to go again.”

England will face Argentina in the bronze medal match on Sunday morning at 10am UK time live on BT Sport.