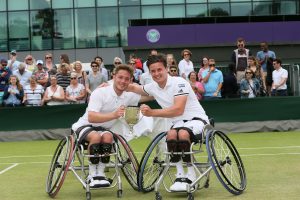 Organised by the Tennis Foundation, the British Open is also the last Super Series event before the Rio 2016 Paralympics and therefore the tournament likely to have the most influence on the seeding for the medal events at Rio between now and the Games.

Reid, will aim for a unique double in Nottingham this year after winning the inaugural men’s singles event at Wimbledon just two weeks ago, watched by a peak TV audience of more than 1 million people.
“I’ve had an amazing few weeks and I’m looking forward to playing here in Nottingham and competing for my first British Open singles title. It’s always a great event and hopefully with the popularity of our sport on the rise we will get lots of people coming along to watch and cheer us on. It’s a quality field and it will be tough but I’m looking forward to getting back on court and competing,” he said.
Reid has risen in the world rankings to a career best No.2 since his Wimbledon triumph and he and reigning champion and world No.1 Stephane Houdet of France top the seeding for the British Open this year, along with reigning NEC Masters champion and 2013 British Open men’s champion Joachim Gerard of Belgium.
Bingham’s Phillipson, recently selected for his third Paralympic Game, will make his return from injury at this year’s British Open and believes the prestigious tournament is ideal preparation for Rio 2016.
“I love playing here in my hometown of Nottingham and the event has come at a great time for me in the build up to Rio. I’ll be looking to put what I’ve been working hard on in training into practice on the court and hopefully get some confidence-boosting results,” said Phillipson. 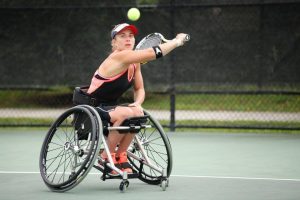 Whiley returns to Nottingham 12 months on from becoming the first Brit to win a Super Series women’s singles title at the British Open. Last year’s victory provided the momentum for Whiley to go on and win her first Grand Slam singles title at the US Open in New York. Whiley will team up with her London 2012 bronze medal-winning partner Lucy Shuker in Nottingham this year as they continue their preparations for Rio.

“The British Open in Nottingham will always hold fond memories having won my first Super Series singles title here last year. That gave me the confidence to go on and win at the US Open and I’m hoping for a similar outcome this year heading into Rio.” said Whiley one of two previous British Open champions among the women’s singles entry this year, along with Germany’s Sabine Ellerbrock. Ellerbrock was one of the higher ranked players Whiley beat in Nottingham in 2015, along with current world No.1 Jiske Griffioen and world No.3 Aniek van Koot. Both Dutchwomen challenge for the title again this year.
Heading the entry for the quad division, for those with a more severe disability, will be world No.1 and 2014 British Open champion Dylan Alcott of Australia, Britain’s world No.4 Andy Lapthorne and reigning champion Lucas Sithole of South Africa. Sithole, who won the title last year, is one of two former two-time champions aiming for victory again this year, alongside the USA’s world No.2 David Wagner.
A high class field that features seven of the world’s top 10 ranked quad singles players also includes local Nottinghamshire interest in the shape of Ruddington’s James Shaw. Shaw arrives in Nottingham having recently won the first ITF 2 Series tile of his career at the Wroclaw Cup in Poland.
The British Open is one of six events to have Super Series status, the highest tier of tournament on the UNIQLO Wheelchair Tennis Tour outside of the Grand Slams.
Tickets are just £5 with a free come and try session for all the family on Saturday 30thth July. Get your tickets here.
Report courtesy of the Tennis Foundation
Tags: Nottingham, Wheelchair tennis