Great Britain slipped to defeat at the women’s Hockey Champions Trophy as Australia plundered four goals to secure their place in the bronze medal match and condemn Danny Kerry’s side to the 5th vs. 6th playoff with New Zealand.

Great Britain started brightly with Bray and Alex Danson both looking threatening in the final third. As the heavens opened and the players had to contend with some awful conditions, Australia stunned the hosts with two quick-fire goals. From a fifth minute penalty corner Kathryn Slattery touched in Georgina Morgan’s pass to make it 1-0. A minute later Karrie McMahon hammered a pass into the circle which was deflected in by Parker to make it 2-0. Great Britain’s best moment of the opening quarter came as a marauding Nicola White latched onto Bray’s pass but her shot was well saved by Ashlee Wells. 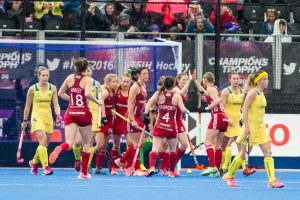 The second quarter started just the way Great Britain needed. A superb run by Helen Richardson-Walsh down the left opened the defence; she swapped passes with Danson and cut back for Bray to fire home to bring the home side back into the contest. Australia’s response was to step up their press and push Great Britain back, not allowing them space and time on the ball. The home side temporarily lost Kate Richardson-Walsh to a ball in the face and with the defence re-organising, Brooke Peris made her way into the circle and shot, but was denied by a smart stop from Maddie Hinch. With seconds to go the break Wells was called upon again as Shona McCallin’s strong run and cross caused the Hockeyroos problems, but it stayed 2-1 at the break.

Just three minutes after half time, the Hockeyroos re-established their two-goal cushion. Emily Smith found space at the far post and slammed in Peris’ cross at the second attempt. Things went from bad to worse for Danny Kerry’s side five minutes later when  Kenny added a fourth from a trademark penalty corner. 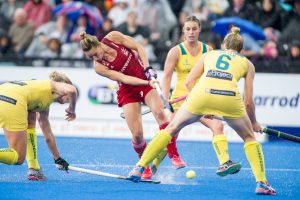 Great Britain searched for a way back into the contest and Giselle Ansley was unlucky to see her penalty corner flash wide of the target with the goalkeeper seemingly beaten. Wells excelled herself from the next penalty corner, getting down well to glove away a thunderbolt from Hollie Webb. At the other end Hinch did well to block from Smith and Grace Stewart in quick succession to stop the lead extending. The Hockeyroos won a penalty corner on the stroke of quarter time. Sam Quek, who was outstanding in defence for GB swatted the ball off the line with a textbook cricket stroke to keep the score down.

Hinch was called into action again at the start of the final quarter, saving well from Stewart but then Great Britain began to push forwards. Susannah Townsend, making her 100th International appearance, broke through the defence with a powerful run but her shot was deflected wide. Ansley was denied by another good save from Wells off a penalty corner and then at the other end, Quek performed more heroics to somehow tackle Slattery when it looked certain the striker had a clear shot at goal. There was still time for Danson to set up White with a precise cross but the defence were able to charge the shot down and despite some good final quarter pressure, Danny Kerry’s team were unable to retrieve the deficit and Australia took the win.

In the other games today, a dress rehearsal for tomorrow’s final went the way of the Netherlands who beat Argentina 2-0. USA made their way into the bronze medal match with Australia after a 1-1 draw against New Zealand.

Sam Quek told Great Britain Hockey afterwards: “We just feel utterly disappointed. It is our responsibility to make the chances, create the play and give the crowd something to shout about. We are doing the right things but it is just final product that isn’t there. We’ve had a few penalty corners and Australia had three or four and scored them. We need to focus on putting them away as it makes a difference. I feel like a I am repeating myself after each game,  but the bottom line is we need to give everyone something to cheer about tomorrow. We need to fight, make those tackles so no one goes through us and we need to show character.”

“We just had firm words after the game, they are the firmest we have had in a long while. It shouldn’t take the captain or the coach to stand up to speak to us in that manner but I think we needed it today. Tomorrow we are going to have to come out fighting as it is our last game before the Olympics. Even if it is not going our way we need to fight for those tackles and make sure we are first to the ball. We can control how hard we work and how hard we put in those tackles.”

“New Zealand have fast players up front so we need to break down the play and keep it tight in the middle to stop their long balls getting through. We need to be in their faces and not let the ball go through us. We are just going to focus on what we can do better tomorrow and come out fresh. It is quick turnaround as we are the first match but we need to recover properly and learn lessons from today. Ultimately it is a fresh start and a chance to put right what we did in the other games.”