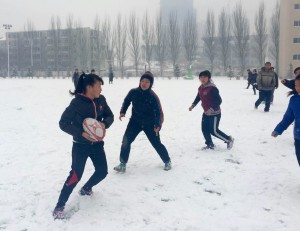 Stars from the women’s game have joined World Rugby, its regional associations and unions around the world in celebrating International Women’s Day 2016 as the international federation announces further growth in female participation.

With rugby continuing to reach and inspire in record numbers, the latest World Rugby participation figures have revealed almost 310,000 more women took up the sport in 2015, a 17 per cent increase from 2014, while 25 per cent of the total global playing population are female.

Increased investment, development programmes and the continued success of the popular HSBC World Rugby Women’s Sevens Series and a record-breaking Rugby World Cup 2015 are among the inspiring factors with 53 per cent of women in the UK saying they had watched RWC 2015.

In a record-breaking year for women’s rugby, an additional 36 per cent of the million children who were introduced to the sport via World Rugby’s Get Into Rugby programme in 2015, run in partnership with unions and local authorities, were girls.

And with the world’s leading women’s stars set to make history when rugby sevens makes its Olympic Games debut in 150 days, these are exciting times for the sport.

New Zealand’s Kendra Cocksedge, World Rugby Women’s Player of the Year in 2015, said: “I love this game so much. It’s given me the most amazing opportunities and experiences from playing alongside great athletes who inspire me every day, to travelling around the world representing my country.

“Through rugby I’ve made friends for life and developed the skills which help me be the best I can be. It’s great to see so many women, young and old, taking up the game in New Zealand and overseas – long may that continue.”

Australia are currently setting the pace in the HSBC World Rugby Women’s Sevens Series, and Chloe Dalton is a core part of that side: “I think women’s sport in general over the last few years, the growth and professionalism across sports has been amazing.

“Women are performing on the world stage and achieving big things so I’m stoked to be a part of that. We hope that as sevens players we can help to contribute to that growth.”

Ireland full-back Niamh Briggs said: “On International Women’s Day, I’m incredibly proud to say that I am captain of the Ireland women’s team. In a sport that’s growing in numbers, I feel very privileged to lead my country as we build towards hosting Women’s Rugby World Cup 2017 here in Ireland.”

Japan player Mateitoga Bogidraumainadave said: “In celebrating another International Women’s Day, I thank all the hard-working women, especially the Japan rugby women’s team, for their togetherness and hard work shown these past few years. I also encourage all women to believe and do your best.”

World Rugby Chairman Bernard Lapasset said: “International Women’s Day is a fitting opportunity to celebrate women’s rugby, a major sporting success, and the players, coaches, match officials, administrators and volunteers who make such a significant contribution to our great game.

“As rugby continues to reach, engage and inspire new participants and audiences in record numbers, women’s rugby is at the heart of the success story with record participation growth, a thriving HSBC World Rugby Sevens Series and Women’s Rugby World Cup and of course Olympic Games inclusion later this year.”