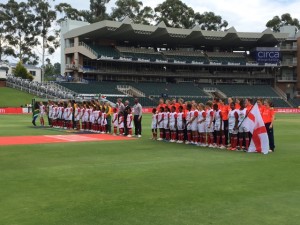 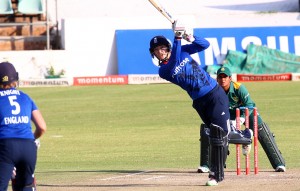 Sarah Taylor’s third consecutive half-century led England women to a four-wicket victory over South Africa in the deciding Twenty20 international at the Wanderers that completed a series double in Mark Robinson’s first tour as Head Coach.

The wicketkeeper-batter struck 10 fours in compiling 60 from 40 balls, passing 2,000 T20I runs in the process, as England overcame a late wobble to chase 132 with 27 balls remaining.

Taylor was supported by Heather Knight, who hit a rapid 25, in an attacking third-wicket stand of 62 in 42 deliveries following the loss of both openers with just 30 on the board. 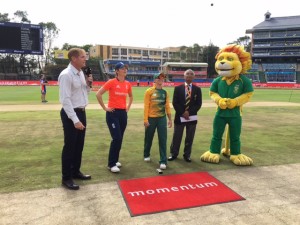 The triumph rounded off a successful tour that saw England win both the one-day international and T20 series 2-1 ahead of next month’s ICC World Twenty20.

South Africa were struggling on six for three in the second over, but recovered brilliantly to post 131 for four courtesy of Lizelle Lee’s career-best T20 score of 69 not out from 61 balls.

Natasha Farrant, one of two changes, and Anya Shrubsole formed a new-ball pairing and they initially justified Charlotte Edwards’ decision to bowl.

Left-armer Farrant, called up as a replacement for the injured Katherine Brunt, had Trisha Chetty stumped by Taylor with the second ball of the match.

Shrubsole then bowled dangerwoman Dane van Niekerk, fresh from back-to-back fifties, before rearranging Marizanne Kapp’s furniture with her next ball.

But the hosts regrouped following a counter-attacking 89-run stand in 14.2 overs between Mignon du Preez and Lee.

Du Preez struck a run-a-ball 39 before she was run out by a Knight direct hit from the deep.

Lee continued on her merry way, hitting eight fours and two sixes in total, and added 36 in 23 balls with Chloe Tryon (16) to leave England with a tough chase.

Amy Jones, promoted to the top of the T20 order, raced out of the blocks by taking 14 off Shabnim Ismail’s first five balls before edging behind.

After Edwards chipped Tryon to Lee at deep square-leg for two, Taylor and Knight continued to attack and helped England to 54 for two after the six-over powerplay.

The half-century stand arrived from 33 balls, the same amount of deliveries it took Taylor to reach her fifty, and broke the back of the chase.

The ball after Taylor raised her bat, Knight skied Sune Luus to wicketkeeper Chetty after hitting a four and two sixes.

Taylor became only the second batter to reach the 2,000-run landmark in T20Is, after skipper Edwards, but was the victim of a stunning return catch from Van Niekerk with 17 runs still required.

Although the fit-again Natalie Sciver and Danni Wyatt were bowled by Ismail, during a late collapse of three wickets for five runs, Tammy Beaumont (21) and Jenny Gunn (eight) led England home.