Italy produced a decisive reponse in the fourth quarter to secure a 60-48 win against Great Britain in Eurobasket Women 2017 Qualifying Group C at the Amaechi Basketball Centre in Manchester on Wednesday. 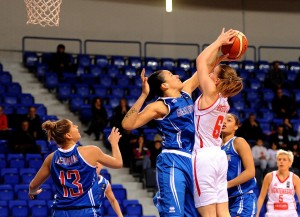 Following on from defeat to group favourites Montenegro on Saturday, Jose Maria Buceta’s side were within two points of their visitors with seven minutes to play.

But Euroleague Women star Laura Macchi inspired a 10-0 run to ensure Italy came away with the win and improved to a 2-0 record in Group C.

Chantelle Handy had 16 points for GB, converting four of her six attempts from three-point range, while Johannah Leedham tallied an 11-point, 10-rebound double-double.

But this was to be Macchi’s night as she finished with a game-high 27 points.

As in Podgorica on Saturday, Buceta’s side came out firing and Handy opened with back-to-back three-pointers. 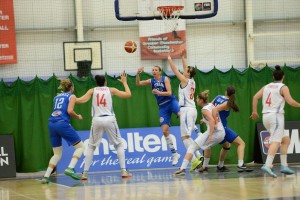 This got the Manchester crowd going and the volume kicked up a notch when star guard Leedham completed a tough ‘and-one’ play to open a seven-point gap before the hosts ended the first quarter 16-7 in front.

However, GB endured five scoreless minutes during the second period, allowing Italy to rally with an 11-0 run to draw level at 18.

Stewart’s return helped the Brits regain their composure just before half-time only for Macchi to beat the buzzer from three-point range to send the visitors into the break with a 29-23 advantage.

Macchi picked up where she left off after half-time, opening the second half with a triple and a made two-point jump shot as the lead grew to 13.

But Leedham and Handy hit back before Helen Naylor kept GB within touching distance with a big-time three-pointer.

Italy continued to make tough shots in the face of energetic and enthusiastic defence and another Handy triple was required to keep the lead down to single figures heading into the final stanza, 46-37.

The momentum swung back into GB’s favour at the beginning of the fourth quarter as a 7-0 start, capped by Georgia Jones’ fantastic three-pointer, cut the deficit to 46-44.

But Italy’s response was deliberate and decisive.

Coach Andrea Capobianco organised his players with a time-out and a 10-0 run – including six more Macchi points – followed, restoring the visitors’ double-digit advantage and leaving Buceta’s side with too much to do.

However,  coach Jose Maria Buceta said after the game: “I am proud of what we have done in just ten days and I think the team has improved.”

“It would have been good to have won this game and in the second quarter, we couldn’t find a position to take and make good shots.

“We made some mistakes defensively and they scored 22 points in that second quarter and that was the key to the game.

“After half-time they extended their lead and we found some new ideas that worked well and the girls showed courage in their quest to win the game when we got it back to 46-44.

He added, “The situation is not good, but we still have four games to play and we have to aim to beat Albania twice, Montenegro at home and Italy away.”

Meanwhile captain Azania Stewart paid tribute to the fans who turned out at the venue.

She said, “There are still positives to take away from this – not least the way the crowd packed out the venue and cheered for us right until the end, having helped us to come back into the game.

“We have to do better and we will come back stronger and even better prepared for the next qualifying window in February when we have another two home games to play.”

You can see interviews and reaction on the BBC website here.