Great Britain booked their place at the Rio Olympics with a backs-to-the-wall display to see off Germany in a tense semi-final of the World League in Valencia. Lily Owsley’s well taken strike in the first half was the difference between the two sides but Danny Kerry’s team were indebted to goalkeeper Maddie Hinch who kept out a string of late German penalty corners to preserve the lead and secure a place in tomorrow’s final and crucially, a spot at next year’s Olympics.

The game started in cagey fashion with both sides aware of the high stakes. Hollie Webb had Great Britain’s first effort on goal, cutting in from the right and blasting a backhand strike over the bar. It wasn’t long before they took the lead, however. A strong run from Susannah Townsend freed Helen Richardson-Walsh. With a three-on-one situation developing, Richardson-Walsh fed Sophie Bray who laid it off to Lily Owsley to spin and slot in a lovely cool finish. 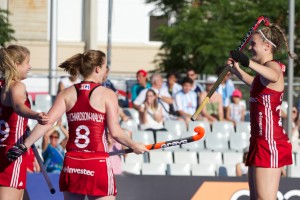 Lily Owsley celebrates the only goal of the match

Germany had a penalty corner with nine minutes on the clock but Owsley, this time defending, did well charging out to block Nike Lorenz’s shot. The rebound fell to Nina Hasselmann who let fly only to be denied by a fine save from Maddie Hinch, keeping it 1-0 at the break.

Sophie Bray had GB’s first chance of the second quarter, cutting in from the left to get a clear sight of goal. Kristina Reynolds dashed from her line and made a superb block to deny the East Grinstead forward. Germany stepped their press higher up the field in attempt to put Danny Kerry’s side under pressure but the defence stood firm and kept them at arm’s length. Great Britain started to threaten on the break and a lovely run by Danson won their first penalty corner. Laura Unsworth’s slapped pass hit the No15’s body and the chance was gone. With three minutes left in the quarter Germany almost pulled level. Charlotte Stapenhorst’s looping effort almost dropped in, landing on the top of the net. At the other end Owsley showed the defence a clean pair of heels and crossed for Joie Leigh, diving in bravely to draw another good save from Reynolds, and it was still 1-0 at half time. 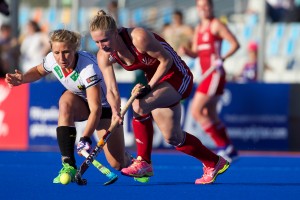 Great Britain had chances to increase their lead in the third quarter. Townsend did brilliantly to turn the ball over and break forwards all on her own. She left the defence trailing but couldn’t find the finish and Reynolds saved. Then Bray and Danson combined well but the latter’s shot from a tight angle was wide. Germany rallied and forced three consecutive penalty corners but some excellent defence from GB saw off the danger. They had a penalty corner of their own on quarter time but Kate Richardson-Walsh’s slap was charged down and dropped away to safety.

In the final quarter Great Britain had another gilt-edged chance to double their lead. Bray broke into the circle with just Reynolds to beat but the goalkeeper blocked as the No19 tried to slide the ball under her. Great Britain continued their pressure and went close to a second goal after a Kate Richardson-Walsh penalty corner was just out of reach of Joie Leigh at the far post.

Germany began to throw everything at Great Britain and forced a number of penalty corners. Hinch showed her class with a string of fine saves including an excellent stick save from an awkward bouncing shot by Luisa Steindor and another superb low stop to deny Hannah Kruger. Germany forced one last penalty corner with seconds left on the clock but Hinch cleared the danger once more and despite the late barrage, Great Britain held on and took the win, the place in the final, and most importantly, the slot at the Rio Olympics.   Great Britain

Goalkeeper Maddie Hinch: “Words can’t really describe the feeling. We came here with qualification in our mind and we’ve taken it one game at a time and done a job. To reach a final and book a spot at Rio, we can’t be happier. We’ve got a great team back home and an incredible goalkeeper coach in John Hurst, so I felt good coming into this competition and once the nerves settled I enjoyed myself.”

“You can’t fault us. We’re hard to score against and we’ve scored some nice goals. At the minute we’re learning and making progress and we’ll keep doing so. I’m excited for the future. I would never say the pressure is off. There is a gold medal to win tomorrow and we’re here to take it.”

Head Coach Danny Kerry: “For 15 minutes we were awesome. After that we won ugly. That in itself is a quality which we have worked hard to drive into the team. We should have been out of sight with the clear chances we created, after we didn’t take them the game became nervy with so much at stake. Our character showed through and we are now officially Rio-bound.”