The England and Wales Cricket Board (ECB) today announced that the first Women’s Cricket Super League will be launched next year, in the 2016 season.

This major development for the game will help support greater participation, encourage higher levels of performance and create new commercial partnerships by:

The competition will feature six teams and will receive a £3 million investment from the ECB over the next four years, following full and unanimous approval from the ECB Board.

This investment will help each team to provide high quality coaching, facilities, training environments and community engagement plans.  It will also allow promotion of the competition and – for the first time in the history of domestic women’s cricket in England – prize money.

Confirming the ground-breaking development for the women’s game, Tom Harrison, Chief Executive of the ECB, said: “Today marks a major step for the women’s game in England.  We are already very proud of the achievements of the England women’s team and the growth of the game for women and girls over the past decade.”

” We now have the opportunity to build on this, inspiring more women and girls to take part and offering players a domestic structure that gives the best cricketers the chance to play against each other in the most competitive environment. The new Women’s Cricket Super League will take standards to a new level and show more women and girls the opportunities that cricket can give.” 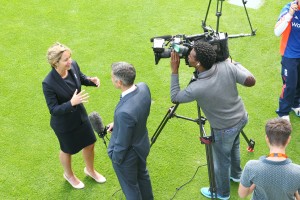 Clare Connor, ECB Director of England Women’s Cricket, said: “The Women’s Cricket Super League is the next stage in the evolution of women’s cricket in this country. Last year brought the introduction of central contracts for 18 England women’s players and a significant commercial deal with Kia Motors.  Now, through the Women’s Cricket Super League, we will create high-performance training and competition environments, which will constantly challenge our very best players and drive the sustained success of our England team.”

“Competition for places will be strong with the best up against the best, creating opportunities for high potential players, who aspire to play for England, to perform and impress.  We also have the chance to invite the world’s finest players into the Women’s Cricket Super League to drive ever higher standards.  Our vision is for an exciting, dynamic game which will inspire new participants, new fans and increased interest from commercial partners and the media.”

“We will soon be seeking potential hosts and a big part of that process will be their drive to grow the game in communities, working with County Boards, the existing cricket network, and creating fresh partnerships. As such we see the Women’s Cricket Super League as a catalyst to drive female participation.”

Minister for Sport, Tracey Crouch, has applauded the news: “This is a huge step forward for women’s sport, providing female athletes with a platform to showcase their skills.  It is also a great opportunity to further grow the game, inspiring a whole new generation of women to take up cricket.”

In structuring the new Women’s Cricket Super League, there will be a strong emphasis on ensuring a high quality and evenly balanced competition, which will be centrally coordinated by the ECB.  As the League is developed, further details on the format and timing of the competition will be announced.

During its first season next year, the Women’s Cricket Super League will be comprised solely of T20 cricket and sit alongside the Royal London Women’s One-Day County Cup and NatWest Women’s County Twenty20 competitions.  From 2017 onwards the structure will develop to both T20 and 50-over formats.

The next step will be for potential team hosts to make an ‘expression of interest’, a process that will start formally this month.  Any cricket-minded organisations will be able to submit a proposal to become a host for a Women’s Cricket Super League team with the successful candidates confirmed by the end of the year.