Two goals from East Grinstead’s Sophie Bray gave Great Britain a hard-fought 2-0 win over China and sent them into the quarter finals of the World League Semi-Final with a 100% record. Bray struck in the first quarter and then again three minutes from time to seal the points against a stubborn Chinese outfit. Great Britain, who will finish top of Pool A will now play either Uruguay or South Africa this Thursday.

Great Britain got off to a dream start, opening the scoring in the fifth minute. Kate Richardson-Walsh stepped forward on the right and found Alex Danson who showed great strength along the baseline to hold off the defender. She cut the ball back to Bray who applied the finish for her fourth of the competition. Danny Kerry’s side had the lion’s share of the possession as China sat deep in an attempt to contain them. Maddie Hinch was a virtual spectator as GB closed the first quarter a goal up. 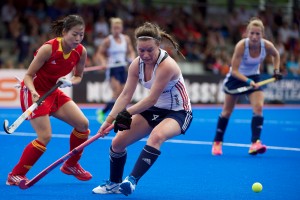 The second quarter was played at a slow pace with China once again setting up a half-court press, defending deep and trying to deny Great Britain space in the attacking half. China’s rare forays forwards were kept at bay by some stout defending from Laura Unsworth, making her 150th international appearance. The score remained unchanged at the break as neither side could fashion any clear chances.

Great Britain almost added a second in the opening minutes of the third quarter. Hannah Macleod did well to turn the ball over high up the pitch and showed great determination to manufacture a cross which was slapped just wide by a diving Danson. The game followed the same pattern as it had in the opening half with chances at a premium. Danson smashed in a reverse stick cross-shot but it was cleared by goalkeeper Dongxiao Li and then the No15 hit a snapshot on the turn which was well saved by the goalkeeper. China continued to frustrate Danny Kerry’s strikers and it was still 1-0 going into the final quarter.

China won their first penalty corner early in the final quarter but Mengyu Wang’s drag flick was charged down by Hollie Webb and the danger was snuffed out. Myung Jun Cho’s team showed greater ambition as the clock ticked down and they won their second penalty corner. Once again Wang’s low effort was well saved by the telescopic right leg of Hinch. The goalkeeper was indebted to her teammate Giselle Ansley moments later as the Surbiton defender cleared off the line from Meiyu Liang’s audacious lob as the Chinese came close to the equaliser.

Great Britain then hit back with a lovely move. Shona McCallin transferred the ball brilliantly from left to right to find Hollie Webb breaking forwards and the No20’s hard-hit cross was deflected just wide by Danson.

With three minutes left on the clock Bray sealed the points. The No19 latched on to Kate Richardson-Walsh’s long pass before beautifully slotting the ball past the goalkeeper to grab her second of the match and her fifth of the tournament.

Great Britain must now wait and see who their quarter final opponents will be, with either South Africa or Uruguay on the horizon this Thursday.

Great Britain Forward Sophie Bray: “They’re a great side and play a different style to the European sides we’re used to playing against. We knew how we had to play and we got the result we needed. To get the win keeps the momentum going into the crucial quarter-final game. We’ll go home, rest and recover and get ready for Thursday.”

“All the teams here are quality sides. We’ll look at the video and prepare for whoever we play as we have done all through the tournament.”

Head Coach Danny Kerry: “It was a disciplined performance and the tactical execution by girls was excellent today. Our second goal was fantastically executed by Sophie Bray, who, like the rest of the team is having an excellent tournament.”