Over 100 female Cricketers descended on The Essex County Ground last Friday (10th April) for the 2nd Annual Women & Girls Press Day to mark the start of another exciting season of Cricket for the Women’s game in Essex. 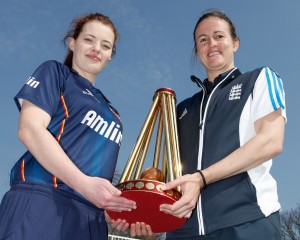 Lydia Greenway and Florence Wilkinson with the Ashes trophy

The event combined the annual team photo call with a surprise visit from England Women’s star Lydia Greenway ahead of the visit of England Women in August as they compete against Australia Women in the Ashes.

Natalie Samaranayake, Essex Women & Girls Development Officer said of the event “this [event] allows the girls who have committed to winter training to be recognised, it makes a great difference having Lydia down to allow them [girls] to aspire to be the next England batsman.”

The Media Day, now in its second year, featured team photos for all of the Essex Women County Age Group Development & Performance Squads, who in 2015, will be the first county to adopt coloured playing kit across every age group.

Dan Feist, Head of Cricket Operations said “Adopting coloured kit across all of our Women & Girls teams is another initiative we are adopting to make Cricket more appealing to those who might be interested in getting involved in the sport. Anything that can modernise the game to appeal to a wider audience is a positive step to preserve the future of the game.”

Emily is a wicketkeeper/batsman and plays for Tasmania in the WNCL state competition in Australia.  Emily plays her Club Cricket in Melbourne for Essendon Maribyrnong Park, the same club as former Essex overseas star Kristen Beams.

Emily has a highest score of 139 not out, made at the 2012 Victorian Under 18 State Championships. In addition to representing the County, Emily will be assisting with the coaching of the younger teams in the County Age Group performance programme.

Matt Hyam, Essex Women & Girls Lead Coach said of the signing “We are delighted that Emily has agreed to join us in 2015 and she will provide us with extra depth in our batting line-up. It is also a great boost to have an additional female coach to help teach the Women’s game in the County.”

Essex Women 1st XI begin their season on Sunday 3rd May against Devon in the Royal London Women’s One-Day Cup.

A video of the day can be found here.