Surbiton continued their fantastic run of form in the Investec Women’s Hockey League Premier Division with a 3-1 defeat of Buckingham on Saturday.  Georgie Twigg got them off the mark in the 29th minute, forcing the ball home from a penalty corner. Julia King added a second after the break.

Although Zoe Shipperley pulled one back for Buckingham, Sandra Frankland killed the game off with Surbiton’s third 13 minutes from time. 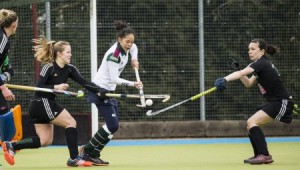 Clifton are doing their best to challenge Surbiton for top spot and are equal on points but have a game less to play and an inferior goal difference. However, they continued their push with a 2-1 win over Leicester courtesy of strikes from Els Mansell and Zoe Leach.

Holcombe and Reading are two of the teams battling for the all-important fourth place at the moment and although there’s a long way to go, both took a step towards securing the final play-off berth with convincing wins.

Nicola White, Lucy Wood, Lauren Osborn and Tamsyn Naylor were all on target for Holcombe as they beat struggling Beeston 4-1.

Reading are only behind Holcombe on goal difference but kept in touching distance with a 3-0 defeat of Bowdon Hightown as goals from Georgie Blackwood and Elizabeth Hunt added to Helen Richardson-Walsh’s opener.

Canterbury edged out University of Birmingham 2-0 with goals in either half from Susannah Townsend and Anna Baker.

With leaders Slough out of action Swansea City closed the gap at the top of the Investec Conference West with a 2-1 win at Bristol Firebrands, courtesy of goals from Danielle Docherty and Natalie Blythe.

Cheltenham lost further ground at the bottom after they were beaten 4-3 by Olton and West Warwicks. Two goals from Kerry Thompson-Moore helped Olton on their way to a slender victory that moved them up two places to seventh, despite a brace from Gayle Pearce for bottom side Cheltenham.

Gloucester City stayed third after a Jess Deane hat-trick helped them to a 6-2 win over Oxford Hawks, whilst Trojan beat Isca 3-2.

Wakefield maintained their slender lead at the top of the Investec Conference North after Heather Stafford’s brace helped them on their way to a 6-2 victory over Ben Rhydding.

Brooklands Poynton kept pace with the leaders with a 4-0 win over Kendal. Two goals from Helen Turner helped keep the pressure on the leaders as Brooklands consolidated in second place.

Jane Sixsmith led the scoring with a brace as Sutton Coldfield romped to a 6-0 win over Whitley Bay and Tynemouth.

Cannock edged a point closer to safety with a 1-1 draw with the University of Durham, whilst second bottom Liverpool Sefton lost at Loughborough.

East Grinstead picked up a slender 1-0 win at Harleston Magpies to keep their eight-point lead intact at the top of the Investec Conference East. Eleanor Keefe scored the game’s only goal in the second half to leave Harleston in fourth.

Sevenoaks remained on East Grinstead’s coat tails with a 3-1 win away at Horsham, courtesy of goals from Jet Van Zalen, Georgina Barker and Kate Hornsby. The home side slipped to the bottom of the table despite Fran Crossley’s consolation goal.

Bedford moved up to ninth after they picked up a 3-1 win at St Albans with goals from Andrea Mason, Claire Bettie and Kate Costin, whilst Ipswich won 3-1 at Chelmsford and Wimbledon beat Maidenhead 1-0.