The England Women’s Blind Team last weekend held its first official training camp at the home of England football, St. George’s Park, utilising the world-class facilities on site and the Tony Larkin Pitch – a bespoke pitch for blind football and one of only two in existence in the UK. 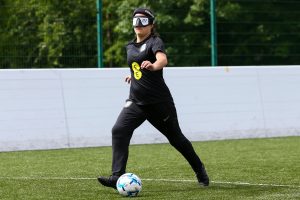 The team spans a wealth of backgrounds, ages, and experiences in football – with some of the team having only recently taken up the sport. Others in the squad have competed in other England Para teams, whilst two of the team are finishing up at University. All the players will receive world-class coaching and support services.

The team are in the earliest stages of their journey and will travel as a developmental squad to take part in a series of international games next month in Pescara, Italy. The FA’s focus is on the long-term progression of the squad whilst also helping them prepare to perform to the best of their abilities at a home World Championships, which will be held in Birmingham in August 2023.

On the team’s creation, Female Para Development Coach, Lauren Asquith, said: “We are delighted that blind and partially sighted women now have a pathway to representing their country with the England Women’s Blind Team. The first sessions have been incredible and the dedication the players have shown to the tactical disciplines and specifics of the game has been brilliant. The FA’s Football Your Way plan set out to deliver for team’s like this, and we hope it’s the start of something that continues to open up doors to all types of football”.

For further information and for opportunities to participate in blind football and other disability football formats, visit englandfootball.com/footballyourway.

With thanks to the FA via Matchfit