PUMA and COPA90 co-hosted the premiere of “Do Both” last night in Lyon, France, with Sara Björk Gunnarsdóttir, her family and friends present. The documentary features professional football player for Olympique Lyonnais and Captain of Iceland’s national team Sara and her incredibly personal journey preparing for motherhood, welcoming her son in November 2021 and returning to her club in March, and country in April 2022.

Compiled over 9 months, the 12-minute documentary gives unparalleled access into Sara’s life, detailing her training schedule while pregnant and the work undertaken with specialist coach Mark Jonson to prepare the footballer for birth and returning to play for the French side just five months after giving birth to her son. The content breaks down the stigma often surrounding female athletes returning to the sport they love, with Sara sharing insights into the physical and mental challenges of preparing for childbirth while maintaining her career as a professional athlete in the French Division 1 Féminine and for the Icelandic national team.

Directed by COPA90’s Lawrence Tallis, the work highlights the societal preconceptions placed on women around remaining active while pregnant and returning to work after giving birth. None more so than female athletes, who often face challenges around their eligibility to compete and receive maternity pay, with many having to make the choice to retire from their careers early to have a family. 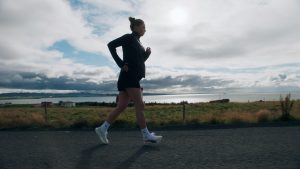 “I’ll be forever thankful that my journey to motherhood has been captured, to inspire others, to remind myself of the challenges I overcame and to show we can break down barriers and not be limited to other people’s perceptions. We are capable of so much more,” said Sara Björk Gunnarsdóttir. “I’m grateful for the support of my family and friends, and of course my partners PUMA who have all supported me as I prepared to welcome my son and return to playing football. I know not everyone has been able to tread the same path, and I hope the documentary can act as a universal truth that, as women and mothers, you do not have to choose between having a family and your career. You can do both.”

“This has been a special project to be a part of from the moment Sara met with us and wanted to give unprecedented access to her personal journey,” said Matthias Baeumer, PUMA General Manager BU Teamsport. “Sara wanted to show that you do not have to choose between your career and starting a family. By sharing her journey, including the mental and physical challenges she has faced along the way, we hope this will inspire and give insight to athletes around the world. In a time when women’s football is going from strength to strength, it is important to bring awareness to such key topics and to show that society’s perceptions do not need to determine your path. The documentary with our partner COPA90 is a beautiful insight into her strength and unique character.” 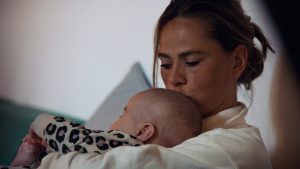 Tom Thirlwall, Chief Executive Officer of COPA90 said: “The power of Sara’s story is one born out around the world every minute of every day, yet in the sporting world so rarely seen. It’s been a privilege to capture her journey preparing for a new stage in her life as both a professional footballer and mother, and to challenge the preconceptions around what Sara’s life should be having welcomed her son. We know the documentary will inspire others, and hopefully shift the societal pressures and judgement, with such a unique insight into her world and her huge mentality and character.”

The documentary is available to view now on COPA90 and PUMA’s YouTube channels.

With thanks to PUMA and COPA90