Team Bath Netball were once again left to rue a run of goals against them in the final quarter as they went down 53-44 at home to defending champions Loughborough Lightning in the Vitality Superleague on Monday. 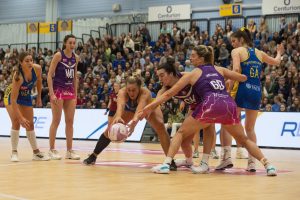 An enthralling game featuring big momentum swings had seen the Haines Watts-sponsored Blue & Gold trail by five, then lead by as many at the end of quarter one before ending both the second and third periods with single-goal advantages.

However, as had been the case against Manchester Thunder two weeks ago, Team Bath let the game get away from them in the last 15 minutes as a lethal Lightning side took the final quarter 18-8 to extend their unbeaten run.

It undermined what had been an impressive performance against strong opposition from the Blue & Gold, with Team Bath Superleague Head Coach Anna Stembridge saying: “It’s frustrating. We knew it was going to be a hotly-contested game and we competed really well for the majority of it. Unfortunately we stopped letting the ball go and became a little too hesitant. We were forced on top of each other but credit to Loughborough for putting us under that pressure. 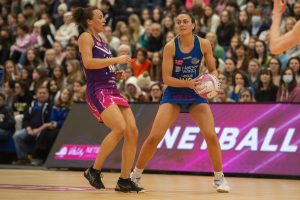 Tash Pavelin on the ball for Team Bath. Photo: Clare Green for Matchtight.

“We know they can score quickly and that’s why you have to be so clinical with your given possession because otherwise you will be punished, and we saw that during two patches in the fourth quarter which cost us.”

Player of the match Phumza Maweni added: “We played well for the first three-quarters but we let it slip away from us. We need to be better than that, we need to control the ball until the end. We go to Wasps on Saturday and we need to go hard now and play for 60 minutes.”

Team Bath, fresh from a 59-43 home win over Celtic Dragons, made one change to the seven that started Sunday’s match as captain Imogen Allison returned at centre. Lightning had also been in action just over 24 hours earlier, beating Wasps 57-53 in a close-fought encounter, but they were quickest out of the blocks and scored the first five goals of the game.

It was the fifth minute before Team Bath got on the scoresheet but they grew into the game, fired up by some fantastic turnovers from Layla Guscoth and Tash Pavelin, and soon levelled at 6-6 before moving into a two-goal lead of their own.

They were now moving the ball around with confidence, putting together some slick attacking moves that Kim Borger and Sophie Drakeford-Lewis converted clinically to give Team Bath a 15-10 lead at the end of the first quarter.

However, the home side found themselves on the back foot again and within five minutes of the restart Lightning were back in front. That prompted some Team Bath changes with Jess Shaw and Betsy Creak coming off the bench to join Rachel Shaw, who had been introduced at the start of the period, in a freshened-up attack.

The replacements all had a positive impact as the two teams went goal for goal during an increasingly tight and tense second period. The battle between Maweni and Lightning shooter Mary Cholhok was a microcosm of the game overall and when Team Bath’s South African defender produced a couple of outstanding turnovers, the home side were able to edge ahead once more with Drakeford-Lewis’s goal just before the buzzer giving them a narrow 25-24 advantage.

Back came Lightning at the start of the third quarter as they quickly regained the lead before stretching their advantage to three goals but Team Bath shuffled the pack effectively once more as Allison, Harris and Borger all returned to the fray, with the latter bagging the last four goals of an enthralling quarter to make it 36-35.

It was all teed up for an epic final quarter but Lightning managed to seize the initiative by grabbing six of the first eight goals to put Team Bath under pressure. The crowd took their cue to crank up the volume as the lead was cut to two with six minutes remaining but there was time for one last – and decisive – momentum shift as a run of seven unanswered Lightning goals killed off the contest.

Next up for the Blue & Gold is a trip to Wasps on Saturday 19th March (7pm centre-pass) before they return to the Team Bath Arena for a fourth huge home game of the month, this time against Saracens Mavericks on Friday 25th March (7.30pm).

Tickets for that game and the other forthcoming home matches are available at netball.teambath.com/tickets.