As part of the 2021 edition of the ICC Awards, the International Cricket Council (ICC) announced Lizelle Lee of South Africa and Babar Azam of Pakistan as the ICC ODI Cricketers of the Year 2021across women’s and men’s international cricket respectively. 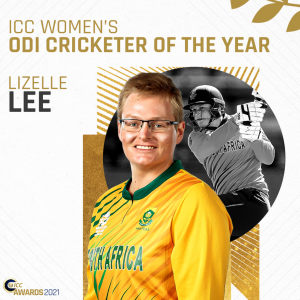 Lizelle Lee has had an outstanding year in ODI cricket. She scored 632 runs in 11 matches at an average of 90.28 that included a century and five half-centuries. Lee also finished as the highest run-scorer in 2021 in fifty over format. In South Africa’s tour of India, Lee was unstoppable, contributing with big runs in the 4-1 series win for her team. With 288 runs, including a hundred and two fifties, she ended the series as the highest run-scorer and was also awarded the Player of the Series. Lee scored the highest individual ODI score of her career at 132* in the third match of the series against India. She carried her form over to the series against West Indies and was once again the top run-getter in the series.

Commenting on receiving the honour Lizelle Lee, said: “I am very privileged and honoured to have been awarded the ICC Women’s ODI Cricketer of the Year. I honestly didn’t expect this. It is a privilege just to be nominated, anyone could have won this award. It is truly an honour!

“There are so many that I would like to give credit to not just on the field but off the field too. Firstly, I would like to thank my family which has been my number one support system, my parents and my wife, our coaching staff, and teammates, without whom none of this would have been possible.”

In the men’s category, Pakistani skipper Babar Azam has had an impressive 2021 across all formats of the game. He scored a total of 405 runs in six matches at an average of 67.50 which included two centuries. Babar was the second-highest run-scorer with 228 runs and was also the Player of the Match in both matches that Pakistan won against South Africa.

Commenting on the honour Babar Azam said: “I feel humbled to have been voted as the ICC Men’s ODI Cricketer of the Year a few days after being adjudged by the PCB as their ODI Cricketer of 2021. Recognition by the parent and then the world administrative bodies means a lot and gives me tremendous satisfaction and happiness.

“It has been an excellent year for Pakistan cricket across all formats and I am delighted to have been part of an outstanding bunch of players who displayed their very best, both on and off the field that, in turn, earned them well deserved respect and acknowledgement from the opponents and fans alike.

“One of the best parts of 2021 was the side was able to further strengthen their connection with Pakistan cricket fans and I remain confident that this bonding will get stronger as we head into 2022, which will be more challenging and demanding than the year that has just finished.”

For all information on the ICC Awards 2021 please refer to the https://www.icc-cricket.com/awards page.

With thanks to the ICC