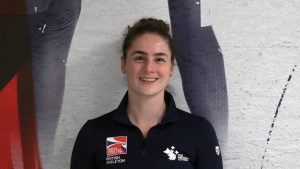 It is a second Games for Deas, who won bronze behind champion and compatriot Lizzy Yarnold at PyeongChang 2018, while Crowley, Weston and Wyatt will all be making their Olympic debuts when the skeleton events take place from 10-12 February.

Deas said: “Being selected for a second Olympic Games feels like a huge honour and it’s something I’ve worked incredibly hard to achieve. Pulling on Team GB kit always makes me feel like I can do something special and, heading to Beijing, I will be aiming to do just that.”

Crowley added: “It’s pretty emotional and I still don’t think it’s sunk in yet. I am so proud that I have been selected to represent Team GB at the Olympics, and it makes it even more special for me after the ups and downs of the last few years.

“I can’t wait to put on the kit and head back out to Beijing and slide. I will enjoy every minute of it and the motivation to go out and compete is really high.”

Weston, a gold-medallist on the World Cup circuit this year, said: “I still can’t believe it’s real! Being selected to not only go to an Olympics but be aiming for medals is a dream I have had since I can remember. I can’t wait to head back out to the best track I’ve raced on this season and enjoy every moment.”

Wyatt, who won Olympic Test Event silver in October on the track being used for the Games, said: “To be selected for the Olympic Games is literally a dream come true. Although this season has been tough, I’m really excited to go out to Beijing with the aim of competing for a medal.”

All four athletes train with the British Bobsleigh & Skeleton Association (BBSA), which has enjoyed outstanding medal success during the two decades since the UK’s only push-start track was built on the University campus following Team Bath’s successful bid for National Lottery funding.

Yarnold took the crown at Sochi 2014 and became the first British winter-sport athlete to successfully defend her Olympic title four years ago, where she was joined on the podium by Deas. There was also bronze in the men’s race for Dom Parsons who, at the time, was combining skeleton with a PhD in Mechanical Engineering at the University.

As well as honing their start – a crucial factor in setting a fast time on the ice – on the push track, the skeleton athletes also train in the high-performance gym and on the indoor and outdoor athletics tracks at the £35million Team Bath Sports Training Village, which is also home to a host of Summer Olympic and Paralympic champions from Tokyo 2020.

Team GB will announce the bobsleigh squad for Beijing later this week. Visit teambath.com/Beijing2022 for the latest Winter Olympic news and a guide to who is competing and when .