Over 9,000 spectators were in the stadium bowl as Quins ran in a 29-5 victory over Wasps on 27th December at Twickenham stadium. The attendance broke the previous record for women’s club rugby anywhere in the world by over 5,000. 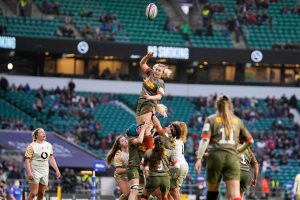 The previous record was also held by Harlequins Women as 4,837 supporters travelled to the Twickenham Stoop for the 2018/19 season’s Game Changer event as Quins hosted Gloucester-Hartpury Women’s RFC in the Premier Allianz 15s.

Significantly Big Game 13 was the first-ever competitive women’s club match held at ‘the home of rugby’ providing a fitting stage for the pinnacle of English club rugby.

The latest BT Sport broadcast viewership data reveals the event peaked at 99,000 viewers at Big Game 13. This exceeds the viewership of 74,000 at peak achieved during the 2020/21 league Allianz Premier 15s Final at Kingsholm Stadium last season as Harlequins Women claimed its first ever Premier 15s trophy with victory over Saracens Women.

Digitally, the Women’s Big Game even delivered nearly 700,000 digital impressions across social media, making it Harlequins Women’s biggest ever mid-season event, and driving further growth for the most followed team in the league.

Harlequins CEO Laurie Dalrymple said: “We are absolutely delighted to see so many supporters attending and following Harlequins Women vs Wasps at Big Game 13. Hosting a record breaking match at Twickenham stadium is something we are very proud to have achieved as we continually strive to grow the Women’s game. We recently began hosting our home league matches at The Stoop and continue to look to support our athletes with first rate facilities and backroom support. Our players are ambassadors not only for the Club, but also elite women’s sport and we are incredibly proud that they can be role models for future generations of players and supporters.”

Responding to questions why the Women’s team did not have bespoke, fitted shirts for the event, Dalrymple responded: “We can fully appreciate the challenge and desire for the Women to have bespoke shirts for this event. As a Club, we are constantly challenging ourselves and our partners to raise the bar and while the reality is that our kit suppler Adidas only makes one fit of the jersey, it is something that we are working on and will shortly announce positive news for the 2022/23 season”.

Harlequins Women will shortly be back at The Twickenham Stoop stadium hosting the third instalment of ‘The Game Changer’ in a mouth-watering top of the table clash with Saracens Women at The Stoop on February 5 as the Club looks to continue to lead the way in the growth of the women’s club game. The event is utilised as a showcase of the pinnacle of club rugby to help drive visibility and engagement with women’s rugby and elite sport.

Click here to book your tickets to the Game Changer

With thanks to Harlequins