Women’s cricket has scored an uplifting boost thanks to a ground-breaking auction and lunch at Lord’s. 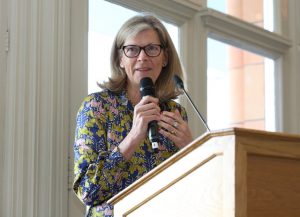 Tens of thousands raised will help expand this country’s network of coaching hubs, with particular benefit targeted at girls.

The money will be used to grow the ‘free to access’ hubs from the 74 at present to 100, with 13 new hubs earmarked for next season.

Organiser of the event, Isabelle Duncan says; ‘We, the Cricket Society Trust (I am president), hosted the lunch in the Long Room. We’re delighted with more than £20,000 raised, the majority for the MCC Foundation, and the rest for Fred Trueman Schools League. We specifically want the funds to go towards girls cricket coaching hubs around the country for disadvantaged state-school kids. Please see cricketsocietytrust.co.uk and https://www.lords.org/mcc/mcc-foundation’.

This year, under 18 girls played their national hubs final at HQ for the first time.

‘It was won by Bradford. It was an important milestone and girls who took part can one day dream to play for the national team’, said MCC Foundation’s Sarah Fane.

New MCC President Clare Connor said;’As first female president I will deliberately bring a female lens to the game and hope for a more progressive future’.

She also told the event how the pioneering Rachael Heyhoe Flint will be remembered by the North gates at the ground being renamed in her honour in time for the first men’s test of next summer.

There is also a ‘massive’ year ahead with the England women’s team now in Oman preparing for their Ashes. Also the Commonwealth Games ‘could provide a platform for olympic inclusion for women’.