If the Black Ferns felt the world top-ranking position was briefly out on loan elsewhere, they have had to readjust their thinking in recent weeks.

As they come to Castres for their final tour match, they face a likely blackwash, four defeats in a row.

Already the staff are pondering the underlying reasons. The superficial one is the lack of test rugby since August 2019, compared with the large numbers of matches France and England have managed to squeeze in despite a pandemic (England seventeen).

Beyond that they need to ask why it was necessary (or felt advisable) to bring as many as thirteen uncapped players in tour. Was the larder so bare of provisions?

Why was the greatest rugby-playing nation not able to bring over competing pairs of players in key positions like their opponents (Bourdon/Sansus; Infante/Macdonald; Trémoulière/Boulard; McKenna/Kildunne)?

By contrast the French management brought their junior squad in for combined sessions at Marcoussis. Yet the elite playing squad remained largely the same. Of the eleven uncapped players in the Red Roses training squad only four have been awarded caps (Holly Aitchison, Heather Cowell, Maud Muir and Sadia Kabeya) before the USA game. More may show up there.

Did the Black Ferns’ management make best use of the Farah Palmer Cup to get their top players back into harness? Large numbers of tourists were listed to play in this, the first big national tournament to get off the ground after the initial lockdown. Were they called away to camp too soon?

Both the English and the French returned regularly to their clubs to play league games. The Black Ferns have looked woefully short of match-practice.

Does that explain all the weaknesses visible, for example scrummaging-power, line-out accuracy and kicking skills?

Not the three we gave seen on tour thus far. They have had their moments, but set-scrums have finished 50-50 at best, and they have found no way of countering the driving mauls they have met each time.

The line-out was a disaster zone in Exeter and has improved only marginally since.

After the Red Roses’ victory in Rotorua in 2017 Kiwi critics pointed to the gap in kicking skills – the English kicked further and more accurately. The current Ferns are facing the same criticism. Neither of the half-backs, Kendra Cocksedge and Ruahei Demant, have extracted big gains from kicks, the European back-threes happily taking advantage.

Glenn Moore and his captain Les Elder now accept that New Zealand rugby has fallen behind. That is a valuable lesson. They will return wiser and more determined to set the matter straight.

But a recurrent problem is where to find worthwhile opposition over the coming year? The traditional answer has been the Wallaroos, but they are stuck in a backwater from which rapid escape looks unlikely. 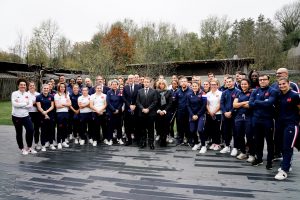 So the answer is in Europe. But the tours originally planned, England and France to New Zealand, seem much more likely; both were keen on an early visit. They could go either together to set up a tri-nations, or in sequence. Such a tour would also act as a useful dry-run for the World Cup, to help the organisers fine-tune their arrangements, not least in drumming up large public support.

Meantime France expects! For them success in Castres would mean a run of four wins over the recurrent world champions, something no other nation has achieved.

They have been honoured by a visit to Marcoussis by the French President and his wife. Now for Boris Johnson to visit Sixways on Sunday.