Barbarian Women have announced that England stars Rochelle “Rocky” Clark, Katy Daley-Mclean and Natasha “Mo” Hunt as the first named players in the squad for the clash against Springbok Women’s XV. 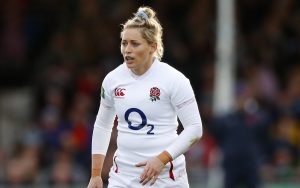 Red Rose fans will be familiar with these three huge names in the sport, who have been trailblazers for international rugby in both 7s and 15s with a whopping 308 international caps between them.

Clark adds her third Barbarian shirt to her extensive list of honours, which include a Rugby World Cup title in 2014, England’s most-capped player and being named an MBE in the Queen’s New Year Honours in 2015. She played for Barbarian Women in their first-ever international against the USA as well as in their first appearance at Twickenham against England in 2019.

She commented: “I grew up watching the Barbarians and loving their style of play. The creation of the Barbarian Women was a big step forward in highlighting the women’s game and I am so proud to be a part of their story.”

Katy Daley-Mclean will reunite with Sale Sharks’ Rachel Taylor in the Barbarians camp, enabling her to gather more experience from a varied coaching team to contribute to her own developing coaching career as she concludes her playing career.

Daley-Mclean is the third most globally capped player, with 536 points for England to her name. Having been named fly-half in World Rugby’s Women’s 15s Team of the Decade, she brings her international career to a fitting close with an appearance for the Barbarians – perhaps the one name that is missing from her resume.

Daley-Mclean said: “Having retired from international rugby at the end of last year, the invitation to sign off at Twickenham with the Barbarians was an opportunity I could not pass up. I’m thrilled to be part of a very exciting and international squad and I’m looking forward to making many new friends in what will be a memorable week.”

Allianz Premier 15s’ club Gloucester-Hartpury’s Captain Natasha Hunt is another teammate and opponent of both Clark’s and Daley-Mclean’s who brings a huge amount of experience from both international 7s and 15s. With two Rugby World Cups, four Six Nations, two Olympic Games and the World 7s Series under her belt, Hunt will link up with Daley-Mclean in the backs to provide world-class experience to manage the Barbarian game.

Hunt said: “I honestly can’t wait to join up with the Barbarians squad and make some unforgettable memories. It’s a really special group to be part of, rich in history and linking back up with Katy and Rocky within that is just the cherry on top. I can’t wait to get into camp with this group and make some lifelong friends, I’m so honoured to be part of it.

Barbarian Women Head Coach Jo Yapp commented: “Announcing Rocky, Katy and Mo as part of our Barbarian Women’s squad to take on Springbok Women’s XV lays down a marker for just how good this squad is going to be. I’m looking forward immensely to getting into camp with a very talented group of players and building a team and style that will bring a huge amount of exciting rugby to the fans at Twickenham.”

John Spencer, President of Barbarian F.C. added: “We are thrilled to welcome these illustrious names into the Barbarian Women’s squad for the Killik Cup Double Header. It is going to be an incredible day packed full of electrifying rugby and the first three names announced in the women’s squad signify the standard of players who will be on the pitch in the Barbarian black and white.

“It will be wonderful to see the Barbarian Women back at Twickenham. Hosting the Springboks at the Home of England Rugby is a significant moment in the progress of our women’s side and reinforces our commitment to both the Barbarian Women and women’s rugby more widely.”

The Killik Cup Double Header 2021 on Saturday 27 November takes place at the home of England Rugby, Twickenham Stadium, featuring the first-ever “home” double header for the Barbarians as they host two international sides for an afternoon of exhilarating world-class rugby.

Barbarian Women will take on a Springbok Women’s XV at 5.15pm, following the men’s fixture against Samoa XV, and ticket prices include both matches. Secure your seats now and be part of the action from *£35 for adults and kids *£15. Visit: www.ticketmaster.co.uk/barbarians

With thanks to the Barbarians