A second crushing win for the Red Roses makes everything in the Franklin’s Gardens smell of roses.

Glenn Moore made several changes to his team, but they proved no more capable of stemming the onslaught than last week.

New Zealand won a penalty at the first scrum and promptly asked for another, but two early handling errors were better omens for what was to come.

England set their stall out with huge tackles that regained possession. A Zoe Harrison kick to the corner led directly to the opening try for Amy Cokayne off an unstoppable catch-and-drive. (7-0)

When the Kiwi kick-off failed to reach 10 metres, England took immediate advantage. After a big forward drive, the ball flew left for Holly Aitchison to send Ellie Kildunne over. (14-0)

The contrast in the two teams was evident: the Red Roses got over the gain-line time after time, their strength in contact paying dividends; the Black Ferns laboured to advance, whether through the forwards or the backs.

Now came a fateful moment. As England developed another threatening move, a final pass to Lydia Thompson deflected off Kendra Cocksedge as she tried to tackle the passer, Leanne Infante. Thompson planted the ball over the line, but on review a penalty try was awarded, and the Ferns lost their match-maker for ten minutes. (21-0)

They made a rare move into the English 22 helped by two penalties, but, just when they seemed likely to score, were themselves pinged for holding on.

The half finished as it started: England working their way all too easily into the Ferns’ red zone where Cokayne completed a second driving maul.

As last week, some of us had to rub our eyes to believe what we had seen. Games involving New Zealand sides, male and female, are simply not supposed to run this course. Already they had opted for a scrum at a penalty, rather than clear to touch and continue from there. They had fumbled passes and run across field for no gain.

Things didn’t improve immediately. They conceded ground and penalties, the second being blown only after a grubber over the line by Harrison just failed to find a receiver. She kicked to the corner and Cokayne had her hat-trick. (35-0)

Now why should she enjoy playing against the Black Ferns so much?

At last the Ferns got their act together. As they attacked the English grew undisciplined, and Aurélie Groizeleau had a word with Poppy Cleall, the new captain. The Ferns spread the ball wide for Stacey Fluhler to feed Portia Woodman smartly for a try in the corner. (35-5)

As team changes started, the general flow didn’t change. A Fern line-out throw flew beyond the forwards for Infante to grab it and dart over from five metres out. (42-5)

She intercepted a Cocksedge pass from a position that reeked of off-side, but was hauled into touch by Woodman only on the NZ 22. This time another English catch-and-drive differed only in the scorer: it was Lark Davies, reprising last week’s successes.(49-5)

The Ferns tried their own catch-and-drive; it didn’t cross the line, but quick hands gave Fluhler an inch of space on the far left that she didn’t need. (49-10)

The question now was: could England force the ultimate indignity on the visitors by topping 50 points?

The answer of course was yes, thanks to a simple but telling action by Poppy Cleall. As the Ferns were held on another raid, she smacked the ball loose and fed it at once to Abby Dow. 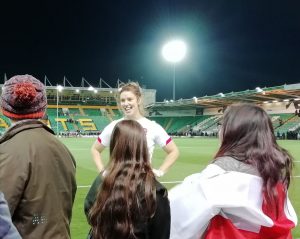 People really do try hard to stop Dow, but here not even the mighty Woodman could halt her progress; she raced over half the length of the field to post the half century. (56-10)

It’s greatly to New Zealand’s credit that they had the last laugh. They broke through midfield and the ball swept out to Woodman who touched down for her second.

If my arithmetic is any good, 56 is exactly divisible by 7. That is a measure of the excellence of Zoe Harrison‘s kicking. It’s hard to think of a better game she has ever played.

Simon Middleton admitted that he had originally intended to let Helena Rowland take the 10 shirt, but Harrison’s Exeter performance earned her the right to keep it. He also took a risk in placing Rowland at 12, but it was another move that worked well.

There were faults in the back play: a couple of cut-out passes to the wing which backfired, and ineffective marking and covering for those successful NZ raids, but overall the level of skill throughout the squad was of the highest order.

This was a team performance to stand alongside the very best.

Player of the Match: Amy Cokayne