It’s as if the first two rounds didn’t take place. All four nations, Ireland, Italy, Scotland and Spain sit on five points with a win and a loss. All that separates them is on-field points, Italy’s big win over Scotland placing them top and bottom of the pile. 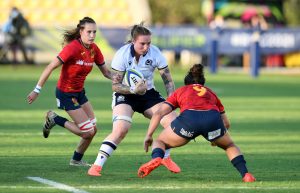 Andrea Di Giandomenico (Italy) likewise leaves his first-choice selection well alone. That means that Francesca Sgorbini retains her place on the flank ahead of Giada Franco.

Only Jose Antonio Barrio (Spain) adjusts his team: Monica Castelo replaces Carmen Castellucci in the second row; Bea Dominguez starts on the right wing instead of Paula Requena; Maria Garcia moves to full-back, allowing the experienced Iera Echebarria to return on the other wing.

For all that Italy are red-hot favourites to beat Spain, their record against them speaks a different story. In fourteen meetings they have beaten them only four times. Lurking in the background is Spain’s resentment of the way Italy supplanted them in the Six Nations in 2007. That has led inevitably to a struggle for the Leonas to maintain the levels needed to counter tier-1 nations. But they have shown enough quality in the previous two rounds to enter this final contest with confidence.

Ireland will be very upset if they fail to overcome the Scots. Recent encounters have been much closer than they would like – 18-14 last time they met in Dublin. And they know the Scots are a fast improving outfit these days.

All four squads will want to ensure their line-out drills are better executed than in the previous rounds. There it was almost a lottery who won possession. In a winner-takes-all setting, none can afford to let prime possession go begging.

It all makes for a quite unusual day of rugby: two successive matches that take on the appearance of finals.

A reminder that the winner qualifies automatically for New Zealand; the runner-up moves on to a final repechage with three other nations.

The line-ups for Saturday 25 September: