Molly Hole has been named as England captain for November’s Europe Netball U21 competition and selected in the Roses Academy squad for the 2021-22 season alongside fellow Team Bath Netball Academy player Ella Williams. 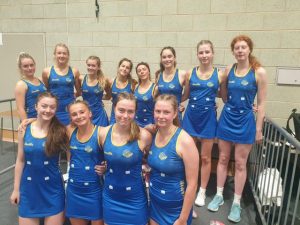 Ella Williams (back row, second from left) with the Team Bath U15s squad at this month’s School Games (Photo Matchtight)

The talented duo earned their places in the 36-strong squad after impressing during a two-day camp over the weekend for players who had previously caught the eye of selectors at Positional Day training sessions during August.

Defender Hole, who can also play as goal-shooter, has previous England experience with both the U19s and U17s, having captained the latter age-group to the Netball Europe title in 2020.

She has now progressed to the U21 squad and will once again skipper the side when they take part in this year’s European competition on the Isle of Man.

Hole has progressed through Team Bath’s Academy Development Centre (ADC) network, spending last season at the new Wiltshire hub based at Bishop Wordsworth’s School in Salisbury, and has represented the Blue & Gold at U19 and U21 level in NPL competition. She also plays for Western Park Blades Netball Club in Hampshire.

This will be a first experience with the England Roses Academy for goal shooter Williams, who trains with the Glastonbury ADC at Millfield School, and comes just three weeks after she impressed for Team Bath’s U15s at the School Games tournament. She also plays for Poole Netball Club in Dorset.