There was huge tension surrounding the two test matches played out in Parma. Scotland and Ireland knew that a second successive loss would mean a sudden end to their World Cup hopes. 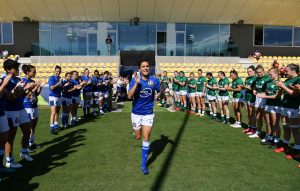 In the first match the two teams lined up as a guard of honour for Sara Barattin who celebrated her 100th cap, the first of her nation to do so. The great Italian scrum-half can now count herself a member of the exclusive Centurions Club.

Adam Griggs made four changes to last week’s disappointing Irish team, Laure Feely replaced Lindsay Peat at loose-head and the two Wasps forwards, Sam Monaghan and Edel McMahon, both earned a start. Out behind Eve Higgins was preferred in midfield to the 7s captain, Lucy Mulhall. She played very well.

Italy started off in their most fluent fashion, linking backs and forwards as if the opposition was there merely to admire their play. The trouble was they were making little headway. When Ireland seized the ball, they kicked ahead to gain ground immediately.

A penalty kick to the right corner gave Ireland the chance of an opening score, but, as was to happen all afternoon, the line-out was inaccurate. Italy responded by running the ball through five pairs of hands across their backs to reach the 10-metre line.

We had to wait 25 minutes for the score-board to tick over. Veronica Madia missed touch with a penalty; Kathryn Dane inserted a grubber that was knocked on 8 metres from the Italian line. From there the Irish pack drove; were held, then released the ball wide fast and wide to Beibhinn Parsons – try! (0-5)

Italy continued their skilful off-loading game, but they still couldn’t find a pass to put a player into space. It took them 35 minutes to develop a real threat. The forwards pounded away at the line, but they needed a calming voice to guide them. Drive after hasty drive was held and a turnover saw Stacey Flood sell a lovely dummy to create space and clear.

The game restarted badly for the visitors: Eimear Considine was deemed guilty of a high tackle and consigned to the white chair for ten minutes. Italy couldn’t capitalise at once, but a rally of kick-tennis ended with Aimee-Leigh Murphy Crowe showing her lack of 15s experience. She set off on a counter-run but then chose to kick ahead. The ball landed in Barattin’s hands. She set off on an arcing run to the left, found support in Manuela Furlan and Beatrice Rigoni finished over the line on the far left. A lovely, simple move. Michela Sillari’s marvellous conversion put the Azzurre in the lead at last. (7-5)

They couldn’t maintain this pressure. When Ireland were awarded a penalty five metres out, Flood was wisely invited to kick for goal. (7-8)

The Italians haven’t yet learned the lesson of field-management. They went on spending far too much time in their own half building movements that lacked penetration. With Madia and Rigoni both able to push kicks far into opposition territory, they overlooked a way to save their forwards unnecessary toil.

They paid a heavy price. Parsons started out of defence with an astonishing run, brushing aside would-be tacklers to reach well into the Italian half. A quick clear-out saw the ball flung wide. Now Murphy Crowe could show why she was on the field; she accelerated past her opponent to career over the line on the right. How wonderful to see two gifted wingers combining in such different ways to produce a score. (7-15)

A full 20 minutes were left, but the Azzurre couldn’t find an answer. A chance gone begging.