All that glittered was athletics bronze for ParalympicsGB as Olivia Breen and Columba Blango both banked podium places at the Olympic Stadium in Tokyo. 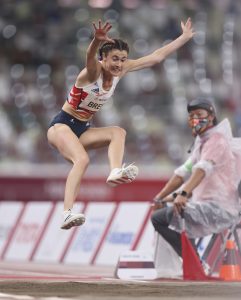 And Breen – a three-time Paralympian – produced 4.91m with her very first jump to claim bronze in the women’s long jump T38, her first individual medal after a 4x100m relay bronze at London 2012.

“I’m over the moon with a bronze medal,” said Breen, after a competition won by Luca Ekler of Hungary with a world record 5.63m jump. “I would have liked to have jumped over five metres but the individual medal means so much to me.

“After I landed that first jump, I knew it was going to be a great competition.

“I just wanted to jump for my life and show what I can do. I was thinking about all the hard work I have put into this, and tried not to tense up. I needed to relax which is difficult to do in a major competition.

“This is my first individual Paralympic medal. I really wanted it in Rio but I put too much pressure on myself.

“You just have to keep driving, keep working hard and just never give up. I’m more mature and I wanted to make the most of every minute of this experience.”

Blango’s dad competed for Sierra Leone as a decathlete at the 1980 Olympics and he would have been proud to see a personal best time, his son splashing through heavy rain to earn his podium place.

Blango Jr said: “For a first Paralympic final, that was very good. I could see the Spanish athlete slowing down so I just told myself, ‘you’ve got this’.

“I just kept going, I am so pleased to win a medal. This was a tough race, it was a whole different level from the heat yesterday. That was serious.

“It’s a major PB. Chris Zah (his coach) knows my needs and wants, so we’ve worked well as a partnership. I’ve got a lot of gratitude for him to be in this position.

“My Dad always said one day I would make it, and he was right. It was such a different experience to anything I had experienced before, so it is definitely a race of a lifetime.”