ParalympicsGB made a strong start in the swimming pool on the first morning of Tokyo 2020, as seven athletes qualified for their respective finals later today. 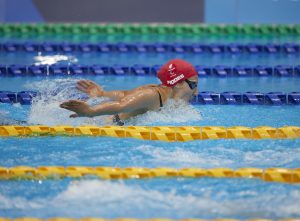 Reece Dunn underlined his gold medal credentials with a new Paralympic record in the men’s 100m butterfly S14 as he touched the wall in 55.99 seconds, 0.79s faster than anyone else.

The 2019 world champion is competing in four events in Tokyo and will go for his first gold at 10.04am BST.

Tully Kearney qualified fastest for the women’s 200m freestyle S5 final in 2:52.30, while teammate Suzanna Hext will also be eyeing a medal after booking her spot with the third-quickest time.

ParalympicsGB’s first swimming medal could come in the women’s 400m freestyle S9 at 9.10am BST after Toni Shaw cruised through with the second-fastest time – 4:46.19.

Elsewhere, Jessica-Jane Applegate and Louise Fiddes made smooth progress in the women’s 100m butterfly S14, with Applegate second in heat one and Fiddes third in heat two.